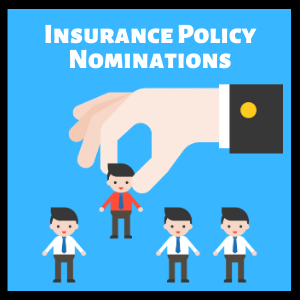 Most of us buy life insurance for the sake of our loved ones.

And we usually call it a day once that’s done.

But have you thought about what if death really happens?

How would your loved ones receive the insurance proceeds? Would it be a hassle for them?

In this article, I’ll touch on:

What Is a Nomination of Beneficiaries?

On 1 September 2009, the Insurance Nomination law was introduced.

This allowed policyholders to easily nominate beneficiaries – people or organisations who would receive the insurance proceeds. Policyholders can specify who and the percentage of the proceeds to be given.

It is not compulsory to do a nomination.

However, it’s a cost-effective way to distribute the proceeds in the event of your death.

There are 2 types of nominations: revocable and trust (irrevocable). I’ll touch more on both later..

Policies That Can Be Nominated

In order to make a nomination, the policyowner must also be the life assured and be at least 18 years old.

The nomination law extends to these polices with death benefits:

Policies That Are Not Applicable for Nomination

Here are some common policies that shouldn’t need a nomination:

Although you can technically make a revocable nomination on an Integrated Shield Plan, it is meaningless.

The plan is to provide you the ability to claim from the insurer for medical expenses. The only “death benefit” of such plans is the “final expense benefit” which only waives the deductible or co-insurance upon death.

As such, there’s nothing to be paid out to your family.

There are 2 common group insurance in Singapore that you might know of – Singlife with Aviva’s MINDEF & MHA group term insurance and your company’s employee welfare benefit (company insurance).

In such policies, the company or organisation is the policyowner and not you (who’s the life assured).

And so if the policyowner is not the life assured, a nomination can’t be made.

This is one of the reasons why group insurance shouldn’t be used as the sole life insurance component in a financial portfolio.

Policies that were gotten before the insurance nomination law is formed (1 Sep 2009) may belong to a separate category.

In such cases, if you’ve never made a nomination before, you may do so now.

However, policies that were nominated before may face some obstacles.

EXAMPLE
If one has a whole life insurance (on himself) and nominated his spouse, and the spouse has since passed, all rights and proceeds of the policy still belong to the deceased spouse.

Therefore, dealing with such policies may be complicated and require special attention.

What Happens When There’s No Nomination

I’m sure you bought life insurance for good measure.

Other than for the living benefits such as claims for critical illness, it’s to leave behind a sum of money for your family to cope financially (or leave a legacy) when you’re not around anymore.

Purchasing the policy is the first part but many failed to do the second – specifying how your assets are to be distributed.

To illustrate the extent of this, only 2% of Singlife with Aviva’s life insurance policies have nominations. And not doing so can create further delays in claiming.

No Nomination; No Will

If you didn’t make any nomination and die without having a Will written, all assets and insurance proceeds will be distributed according the the Intestate Succession Act.

When there’s an eligible death claim, the insurance company can pay up to $150,000 to a “proper claimant”- usually an immediate family member or the executor.

And it doesn’t mean that the “proper claimant” is entitled to the proceeds. It’s still meant to be distributed accordingly.

As for the excess, the insurance company can hold the funds until the Grant of Letters of Administration (court order) is shown. This is the legal process for the Administrator (usually a next-of-kin) to obtain control of the assets to be distributed, and it can take months.

In a time when the family is grieving, it is draining for them to go through this process.

But if there’s a nomination made prior and claim documents are properly furnished, the entire amount of the death benefit can be paid out to the nominees without going through the legal process.

That’s the main advantage of having a nomination.

No Nomination; Have Will

If there’s no nomination made but you have a Will done up properly, insurance proceeds can go according to the Will.

However, specific conditions need to be met.

And the insurance company should also be notified of the Will.

Upon a claim, the insurance company can release the money to the Executor of the Will to be distributed accordingly.

This process can still be a hassle. And the insurance company may only release the proceeds after the Grant of Probate (which can take months).

To make things simpler, consider making a nomination on your life insurance policies and just indicating the policies in the inventory (attached to the Will).

This also ensures fast payouts from the insurance company and skipping the lengthy legal process (which still applies for the rest of your assets).

Is Making an Insurance Nomination Always the Right Answer?

The short answer is no.

When you make a nomination, the legal process can be bypassed. And the insurance company can pay out straightaway to the nominees.

Do you want that?

Perhaps not all the time, especially when you have young kids.

It will mean that your young children can have access to the proceeds immediately. Can they manage it well? Maybe not.

This isn’t that much of a concern if your nominees are independent and of matured age.

So although liquidity can be a good thing, too much of it can have an adverse effect.

Therefore, a solution could be to have some policies nominated (for faster access), and the rest can be included in the Will with a testamentary trust. This is so that you’re able to stagger payments or payout on a monthly basis (for example).

Another solution is to create a living trust. This gives you even greater flexibility as to how your assets are distributed.

It all depends on your situation and your preferences too.

The 2 Main Types of Nomination: Revocable and Trust (Irrevocable)

There are 2 types of nominations you can make – revocable and trust.

Usually called Form 4 and it’s under section 49M of the Insurance Act.

Its purpose is in its name. You can make a nomination and then revoke it (easily) in the future.

This is only applicable to the death benefit and not living benefits (i.e critical illness claims).

Who can be nominated

They need not be your family members and can even be organisations.

Requirements to make the nomination

What happens after the nomination

You still hold control of the policy and so you can make changes such as changing giro accounts, withdrawing amounts from the policy, etc.

What if my nominee passes on first

When there are multiple nominees and one passes on, then his share would be distributed according to each surviving nominee’s initial share.

If there are no surviving nominees, the nomination is considered revoked.

Like the revocable one, you can use a trust nomination to indicate who your beneficiaries are and the percentage they can receive.

It’s also called Form 1 and is under section 49L of the Insurance Act.

The trust nomination is only used when you’re exceptionally sure that you want the insurance proceeds to go to the named beneficiaries.

It is rather permanent as you’re giving away full control and rights (including living benefits).

One major benefit of this is that in the event of a bankruptcy, creditors generally can’t claim from the insurance proceeds.

However, there are certain policies that you can’t make trust nomination on.

Who can be nominated

Only your spouse and children.

Requirements to make the nomination

What happens after the nomination

As full rights are given to your nominees, only they hold the rights to make any changes.

Even if you wish to change minor aspects to the policy, you’re unable to do so without the consent of all nominees or the trustee (who can’t be you).

What if my nominee passes on first

This will be very different from the revocable nomination.

When a nominee passes on, his share of the insurance proceeds (in the future) will go to his estate.

You’ll need a written consent from the trustee (who can’t be you) or from all the nominees.

A revocation of trust nomination is needed to be sent to the insurance company.

You can then make a fresh trust or revocable nomination.

In deciding which nomination to choose, it’s usually the revocable one.

But here’s a comparison of the two to help you decide:

Where to Get These Forms

You can make a nomination on your own.

These are the usual nomination forms available:

Every insurance company will provide these forms to download.

You can download them, fill them up, have them witnessed and submit to the insurance company by post or through their customer centre.

Note: You can’t have errors on the forms (no counter-signing either) or the form will be rejected.

Alternatively, ask your financial consultant to assist you.

The importance of estate planning should be highlighted more.

If you’re already buying life insurance for the sake of your family, take further steps to ensure they receive it properly.

It ensures that your loved ones will receive the insurance proceeds without any hiccups. And isn’t that the true intention of having life insurance coverage?

Insurance nominations are just one part of estate planning, though.

The other parts are making a CPF nomination, having a Will written up, and the possibility of setting up a trust.

These will then cover all bases for a solid asset transition upon death.