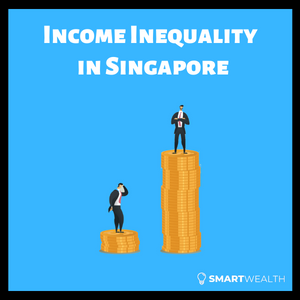 Despite being a small country, Singapore is fortunate to have achieved great economic progress throughout the years. In general, most Singaporeans have higher incomes and greater wealth now than ever before.

But, does that mean that everyone has benefitted from the country’s success?

In most developed countries, including Singapore, the gap between the rich and the poor is prevalent.

Are the rich getting richer? The poor getting poorer?

In today’s article, we’ll look at some statistics that show the degree of income (and wealth) inequality in Singapore.

What Is Income Inequality?

According to Investopedia, income inequality is how income is unevenly distributed across a population.

When the distribution of income is less equal, there’s a higher level of income inequality, and vice versa.

By further splitting the population, we’re able to identify the levels of inequality by various segments such as gender and race.

What’s the Difference Between Income Inequality and Wealth Inequality?

While income and wealth may seem similar, they’re different.

Income usually refers to the money earned through employment or having a business, while the wealth of an individual (or net worth) is total assets minus total liabilities.

A high-income earning individual may not have a high net worth. In fact, one in two high-income earners are worried that they don’t have enough savings. And many find their incomes insufficient to cover their monthly expenses and thus have to rely on their savings to pay the bills, resulting in less assets (and wealth) being created.

On the other hand, if a lower-income individual is able to practice good spending habits and save/invest, they could build wealth at a faster rate than some of these higher-income earners.

But of course, if high-income earners are able to practice good financial hygiene, they’re able to build wealth at an accelerated rate.

Unfortunately, for those who are in the lowest income group, they might not have anything left to be saved after spending on necessities.

What Causes Income Inequality in Singapore?

There’s limited information on the concluding causes of income inequality in Singapore, as it’s a complicated subject and there are many factors involved.

Of course, there are theories.

One such theory is that of technological advances. High-skilled and educated workers become in demand and are paid a premium, whereas low-skilled workers may find their incomes stagnating, thus widening the income gap.

That being said, more has been done by the government to reduce income inequality, which has been made a national priority. More on that later.

Let’s look at some statistics.

As mentioned earlier, income and wealth are different.

How wealthy are the people living in Singapore?

Credit Suisse releases an annual report on the household wealth of 5.2 billion people across the globe. We analysed these reports and discovered some interesting findings.

While the average wealth per adult in Singapore is $449,543, it’s not a true representation of wealth of the majority of the population. The median wealth per adult, a better measure, is $117,068.

The report also stated that there are 269,925 millionaires, of which 60 have more than a billion in wealth.

However, at the other end of the spectrum, 16.2% of the adult resident population, or 792,000 people, have a net worth of less than $13,500, shining some light on the wealth inequality here.

The median gross monthly income (inclusive of employers’ CPF contributions) was $4,680 in 2021. This means that half of the population was earning below that amount, and the other half was earning above that.

While it’s good to know that the median income has increased, it only reflects those in the “middle” of the population.

We’ll need to take a look at the bottom and the top income earners.

3) The difference in average monthly household income per member between the top 10% and bottom 10% is $12,840

Here are data on the average monthly household income per member (inclusive of employer CPF contributions) of the bottom 10% and top 10%:

However, it must be noted that these figures don’t include government transfers, which are primarily meant to help lower-income families. We’ll touch more on that later.

Next, we should also look at the rate of increase of household income per member.

When we factor in inflation, here are some data on the real change in average monthly household income per household member:

Looking at the numbers, 2020 was a tough year for everyone as all income groups suffered a drop in household income.

The bottom 10% suffered the most with the steepest drop of 6.1% in income. And because of that, more help has been given by the government.

4) Lower-income families received the highest government transfers of $13,670 in 2020

Examples of government transfers include CPF and MediSave top-ups, GST vouchers, and the many schemes available to provide financial aid.

These government transfers are funded by government revenue, of which the bulk comes from corporate and personal income tax and goods and services tax (GST).

A greater percentage of such taxes (including others) tends to come from richer people as they earn a higher income, own cars, have multiple properties, etc.

Here are the average annual government transfers (per household member) given over the years:

An average of $13,670 in government transfers, the highest in any given year, was given to each member living in HDB one- and two-room flats in 2020. You can also see that the numbers of government transfers are much lower in other types of dwelling.

With all this aid, income inequality has been reduced, as seen from the Gini coefficient.

Another way to measure income equality is the Gini coefficient. While there are many ways to compute this figure, Singapore mainly uses household income.

Here are the Gini coefficient data on household income (per household member) in Singapore over the past decade:

As you can see, even when we don’t account for government transfers, the Gini coefficient has been decreasing over the years.

But government transfers do matter.

With all the aid received in 2020, the Gini coefficient has reached 0.375, the lowest point in a decade.

One way to do this is to provide government transfers to redirect wealth to lower-income families.

And the data have shown that income inequality has been reduced over the past years.

In my opinion, while it’s good that government aid is provided, one should always try to be in control of and improve their own finances, whenever possible.

Making efforts to build a career and having good financial literacy can push up your personal finances in the long run. As such, consider going through a comprehensive financial planning session.