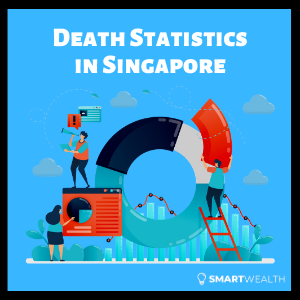 Death can be a sensitive topic in Singapore.

But does it need to be that way?

The hard truth is that every single one of us will die at some point of time. The question is when.

I could very well drop dead while typing this or live beyond the average life expectancy.

Questions we should be asking ourselves:

The odd feeling is that when we realise and accept that death is 100% guaranteed and can happen at anytime, we start to appreciate the time we have left and lead a more purpose-driven life.

Because every single moment counts.

But for now, let’s look at some statistics and facts on deaths in Singapore.

1) The Probability of Dying Within One Year

It is a given fact that we’re more likely to die the older we get.

But wouldn’t it be interesting to find out the likelihood of death happening at every single point of time in life?

Here’s the probability of dying within one year by age and sex:

Here’s the raw data of the probability (in percentage) of dying between exact age X and age X+1:

Generally, for both males and females, the mortality rate starts off higher before Age 1, but drops off significantly after one year. After, the risk of death starts to decrease until it hits the lowest point (around Age 11-12). And then, it rises all the way up.

How many people die every year in Singapore?

As you can see from the graph, the number of deaths has been increasing over the years.

Having said that, it doesn’t necessarily mean that there’s a higher death rate now as many factors influence this increase.

3) The Current Crude Death Rate in Singapore Is 5.2 Per Thousand Residents

The crude death rate in 2020 is 5.2 deaths per thousand residents.

Here’s the trend of the crude death rate over the years:

The crude death rate seems to be on an upward trend.

In addition, if Singapore continues to have one of the lowest fertility rates in the world and a slowdown in immigration, this situation would be more prominent in the future.

As the crude death rate is just a crude measure, it may not be meaningful when compared with populations with different age structures. Also, a higher rate doesn’t necessarily mean that the mortality conditions are bad.

Compared to the crude death rate, the age-specific death rate can shine more light on how deaths are distributed according to age groups.

Here are the age-specific death rates (per thousand residents) in 2020:

The age-specific death rates will differ from time to time. To derive some meaning from it, we can compare it against an earlier year (2020 vs 2000):

As you can see, deaths occured within each age group have decreased significantly since 2000. This is due to the improvements in health and mortality in Singapore.

Although age-specific death rates takes into consideration the age structure of a population, it doesn’t offer a summary index, unlike the crude death rate.

5) The Age-Standardised Death Rate Has Been Declining

Unlike the crude death rate and age-specific death rate, the age-standardised death rate factors in the age structure of the population and offers a summary index.

Therefore, it can provide more meaningful insights when compared with other populations with different age structures.

Like the age-specific death rate, the downward trend of the age-standardised death rate indicates improvements in health and mortality. As a side note, the decrease in mortality rate led to a lower cost of life insurance (e.g term insurance and whole life insurance) over the years.

6) The Current Life Expectancy in Singapore Is 83.6 Years

Life expectancy is the average number of years a person could expect to live for.

The average life expectancy in Singapore has risen over the years:

Breaking this down further, women tend to live longer than men (85.7 years versus 81.4 years).

Are we likely to live longer in the future?

The answer is yes.

According to a study done, Singapore’s life expectancy is already one of the highest in the world and is projected to hit 85.4 years in 2040.

Although having a longer life expectancy has its own benefits, there are downsides too.

Firstly, when planning for one’s retirement, he/she should cater for a larger amount because of the “extended” retirement period.

8) Cancer Is the Leading Cause of Death in Singapore

What causes all these deaths in Singapore?

Here are some statistics on deaths by cause:

The top cause of death in Singapore is cancer. This is followed by pneumonia and ischaemic heart diseases. Together, these 3 causes already make up 67.9% of all deaths.

Another perspective: the top 10 causes of death make up 89.1% of all deaths. Illnesses and diseases made up a huge percentage compared to external causes which is just 4.00%.

Being one of the most common critical illnesses, cancer has always been a pressing concern for Singaporeans.

The likelihood of developing cancer is high; 1 in 4 to 5 Singaporeans are expected to get cancer by age 75.

There are 3 main types of coverages in life insurance:

More on that later.

From the death statistics in the earlier part of the article, we know that as we get older, the probability of death increases exponentially.

However, from the analysis we did, the number of death claims don’t increase with age.

Here are the ages when death claims were made:

The highest number of death claims happened between age 61 to 65.

3 likely reasons to explain this deviation:

But this is normal as life insurance should primarily be used to replace the loss of income in the event of a premature death.

From the same study, we also found out that the average death claim is $48,534.

Do you think that amount is enough?

As the cost of living in Singapore increases over time, reliance on income gets heavier.

If death were to occur at a younger age, would your family be able to cope with the burden of one less income earner?

Because once the payout is exhausted, the next thing your family have to rely on will be your hard-earned savings/investments. And once that dries up, they might need to resort to asking help from family and friends.

So it’s important to have adequate life insurance coverage to eliminate such financial risks. Check how much you need with this calculator.

Looking at all these statistics, it’s likely that we would die at an older age.

But the same statistics also show that there’s always a possibility that it can happen at any point of our lives.

Therefore, we should always plan for the good and the bad.

Most importantly, know that life is precious. Time is in limited quantities (not a marketing gimmick) and it’s running out as we speak.

Make the best use of it for the benefit of yourself and the people around you.