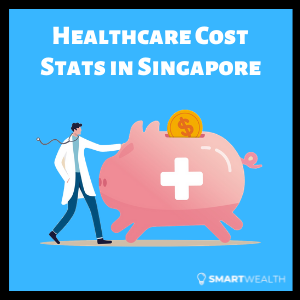 That’s what most people would think about the living expenses in Singapore.

How about medical costs? Are they pricey too?

Here’s a compilation of the most important statistics on healthcare costs in Singapore. (This page will be updated from time to time to reflect the latest information.)

A Quick Overview of Healthcare in Singapore

COVID has drastically changed the landscape of healthcare in every single country.

Some countries have done better; some have done worse.

Singapore has done better. According to the Bloomberg Health-Efficiency Index, Singapore was ranked from number two to number one for having the most efficient healthcare system in the COVID era.

Also, in 2021, Singapore General Hospital (SGH) was ranked eighth for the world’s best hospitals out of 2,000 hospitals. SGH was the only Asian hospital in the top 10.

These healthcare statistics aren’t surprising as Singaporeans enjoy one of the longest life expectancies in the world, which is currently at 83.6 years and is expected to increase to 85.4 years in 2040.

One of the reasons for Singaporeans living longer is early detection (and prevention) of chronic diseases and critical illnesses.

But having access to a good healthcare system comes with a cost.

Singapore was named the world’s most expensive city for six out of the past seven years, according to The Economist Intelligence Unit’s Worldwide Cost of Living study. However, it’s important to note that this report comes from the viewpoint of an expat/foreigner. With subsidies and grants, a Singaporean experiences a lower cost of living.

Nonetheless, the cost of healthcare can still be significant and has been an interest as of late.

So let’s take a look at some statistics.

1) The inflation rate for medical costs was 10% per year

The inflation rate measures the rise in price of a basket of goods and services over a period of time, usually measured yearly.

In a growing economy, it’s perfectly normal for the cost of living to increase. More concern should be given when the inflation rate is at its extremes.

The “general” inflation factors in all types of goods and services, so if we want to find out more about the inflation for medical costs, we’ll simply look into the category of healthcare.

External sources estimated that Singapore’s medical inflation rate for 2019 and 2020 was 10% per year.

In contrast, the average headline inflation rate over the same period was only 1.54%.

What do all these numbers mean?

But why are healthcare costs rising? You can read more about the reasons here.

With land scarcity and very few natural resources, Singapore has to largely depend on its people.

In order to increase productivity (and the economy), the well-being of the population, alongside education, have always been a focus.

Here’s the government health expenditure over the years:

As you can see, the government health expenditure surpassed the $10 billion mark in FY2018. And it tripled from $3.745 billion in FY2009 to $11.3 billion in FY2019. Health Minister Gan Kim Yong has also stated that government spending on healthcare is likely to continue rising.

What is the government planning to spend on? As the consumption of healthcare services is expected to grow, provision of primary care will increase. There are plans to build 12 new polyclinics, resulting in a total of 32 by 2030. In addition, the salaries of healthcare workers, including nurses, will be raised.

Another point that Mr Gan mentioned is that the government will be providing more financial support for lower-income households, so those with less will receive more.

However, the rapid increase in healthcare spending is unsustainable, which is why the government is promoting healthy living in hopes that Singapore residents won’t need to rely and/or spend too much on healthcare facilities.

Whether it’s an accident or an illness, the hospital is the first place you’ll visit.

Among all healthcare facilities, the costs at a hospital are the highest, which is why Singaporeans are always concerned with the cost of hospitalisation.

The costs greatly differ between private and public hospitals.

From 2007 to 2017, costs for private healthcare grew 9% year-on-year, almost double the increase in costs for public healthcare.

Below are the average hospital bill sizes in Singapore.

But these figures are just averages.

Let’s look at an example of a simple knee joint replacement on one side:

Such surgeries can make a dent in your savings account.

In general, most Singaporeans aren’t afraid of small and minor injuries, as they’re not life-threatening and are often cheaper to treat.

More are afraid of critical illnesses.

These are the top five critical illnesses (CIs) in Singapore:

And they make up more than 90% of all critical illness claims.

Furthermore, one in every four to five Singaporeans may get a critical illness (of any stage) in their lifetime.

One of the most important critical illnesses is cancer, which makes up the bulk of CI claims:

And here are other statistics on cancer:

That being said, the costs of treating cancer are the next biggest worry. Because cancer requires a longer period of treatment, it can hit patients’ savings hard.

Other than cancer, here are some costs for heart-related conditions:

And here are some costs for stroke:

MediShield Life, Singapore’s national health insurance, is compulsory for all citizens and permanent residents and is fully payable by MediSave balances.

Driven by a rise in healthcare costs and in order to provide more comprehensive cover, premiums for MediShield Life have increased, effective from 1 Mar 2021. Some age groups have had premium increases of up to 35.4%.

Here are the percentage changes in premiums:

Fortunately, more subsidies are now provided on top of what was previously offered.

Singaporeans are also given the option to cover for private hospitals by upgrading with an Integrated Shield Plan (IP) and/or an IP rider.

An IP with a “full” rider enabled the insured patient to potentially claim the full bill, effectively paying $0 out of pocket. And because of this, insurance companies have faced financial issues.

With more frequent and bigger claims, insurers struggled, leading to an astronomical rise in premiums of IPs with “full” riders. This sparked an industry-wide change to implement co-payment options.

But that wasn’t enough. This year, “full” riders are being phased out, even for those who bought them before 7 Mar 2018. Most who were on such riders will be converted to the co-payment rider.

The Ministry of Health (MOH) has also indicated that phasing out these “full” riders and replacing them with the co-payment one will reduce the propensity of over-consumption, over-servicing, and over-charging.

As of 29 May 2021, a person who turns 36 on their next birthday will have to pay an average of $953 a year (across four companies) for an IP with private hospital coverage together with a 5% co-payment rider. Note: For simplicity and for illustration purposes, we lumped the premiums of the main pain and rider together. Part of these premiums are payable by MediSave up to withdrawal limits, and the rest in cash. These premiums also don’t include the MediShield Life premiums.

6) Households spent an average of 5.5% of their monthly expenses on healthcare

Here’s the proportion of monthly household expenditure spent on healthcare (%):

In 2017/2018, healthcare costs contributed to 5.5% of monthly household expenditure. That percentage amounted to households spending an average of $323 per month on healthcare (excluding insurance).

While those numbers may seem high, what’s even more concerning is that the lowest 20% income group spent 7.8% of their monthly expenses on healthcare, the highest among all the income groups. Spending more on healthcare means having less money for other essentials such as food. And this is probably why the government is concentrating its efforts to ensure that the lower-income groups benefit from more financial aid.

Outpatient care usually consists of everything outside of inpatient treatment, so typically they have a smaller bill size.

Here are some cost estimates:

In Singapore, healthcare can be expensive, and it will likely stay that way for the foreseeable future.

One of the best ways to keep the cost of healthcare down is to practise healthy living.

But having a safety net gives greater assurance when things turn sour. Having the core insurance policies in place, such as medical insurance, reduces the risk of paying for large medical bills.

So, take some time and learn more about the national healthcare scheme, MediShield Life, and its upgrade, the Integrated Shield Plan, now.