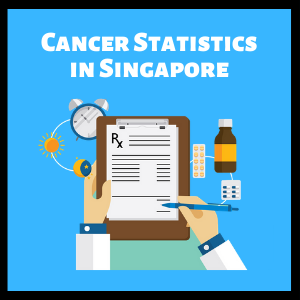 Have you tried to search for statistics on cancer in Singapore?

You’ll realise that they are all over the place.

So this page is meant to compile all the important data, trends and statistics on cancer in Singapore. And it’ll be constantly updated to reflect the latest information.

Here are some of the statistics we’ve included:

A Primer on Cancer

Here’s a quick overview of what cancer is:

Your body is made up of living cells which can grow, divide, die and get replaced by new cells. This process happens in a natural and organised way. However, that process may break down and cause cancer to develop.

The old cells do not die but grow uncontrollably, forming new and abnormal cells. These extra cells may then form tumour – a mass of tissue.

It is important to detect cancer at its earlier stage (through regular screenings) as the chances of survival will be higher and the costs to treat it will be lower.

There are various ways to treat cancer. Surgery, chemotherapy and radiation therapy are the most common ones.

Even so, there’s no guarantee of a cure as a recurrence can still happen.

So that’s a quick overview.

Let’s look at some statistics on cancer in Singapore.

1) Cancer Accounts for 28.4% of All Deaths in Singapore

From this pool of people, how many deaths happened?

There were a total of 20,288 resident deaths in 2019 equating to a crude death rate of about 5 deaths per thousand residents.

How many deaths were due to cancer?

Here are the causes of death:

As you can see, cancer accounted for 28.40% of deaths and is the number 1 cause of death in Singapore. It also means that cancer caused about 1 in every 3 deaths.

Roughly 15 Singaporeans are dying every single day because of cancer, making it an important death statistic.

Furthermore, we did a study on 36 months of life insurance claims and here are 2 interesting findings:

2) Cancer Cases (and Rates) Are on the Rise in Singapore

Knowing that cancer has a high fatality rate, we don’t want it in our books.

While there are various ways to reduce the chances of contracting cancer, how common is it now?

One way to find out is to calculate the cancer rate or cancer incidence rate – only the new cases.

This meant that an average of 14,253 cancer diagnoses are reported every year, equating to around 39 Singaporeans being diagnosed with cancer every single day.

But we still need to take the population into account.

Here are the crude incidence rates (per 100,000 population):

However, as Singapore has an ageing population, it influences the crude incidence rate.

So, we should also look at the age-standardised incidence rates:

Overall, as the total number of cancer diagnoses, crude incidence rate and age-standardised incidence rate are on an upwards trend, cancer is a growing health concern in Singapore.

In my opinion, the actual figures (number of cancer diagnoses, crude incidence rate and age-standardised incidence rate) could be higher because only diagnosed cases are recorded (after screenings or check-ups).

What about those that didn’t go for check-ups? They might not even know they have cancer and it can go undetected until it’s too late.

But eventually, complications will arise leading to a detection, and that brings us to the next statistic.

The lifetime risk of cancer is 1 for every 4 to 5 people in Singapore.

And to break it down even further..

These figures could be a cause for concern for all Singaporeans.

To reduce the occurrence of cancer, one may want to have a proper diet, engage in physical activities, make lifestyle changes and stop smoking.

4) Singapore’s Cancer Rate Is Ranked 42 in the World

If our cancer rate seems high to you, how does it compare to other countries?

Well, Singapore is ranked 42 for the highest cancer rates globally.

In comparison, the country with the highest cancer rate is Australia with a rate of 468. And the top 10 countries come from Oceania, Europe and North America.

Here are the most common cancers affecting men and women:

Here are the top 10 most common cancers for men:

As you can see, the top cancer for men is Colo-rectum cancer at 16.8%, and just following closely behind are Lung cancer and Prostate cancer at 14.5% and 14% respectively.

Here are the top 10 most common cancers for women:

From the data, the top cancer for women is Breast cancer at 29.4%. It’s more common compared to the rest by a huge margin.

6) Men Are More Likely to Develop Cancer (or Is It?)

Throughout the years, it is widely known that men have a higher probability to get cancer.

Here’s the graph to show the age-standardised cancer rates for both men and women:

In the earlier years, the gap was huge. But now, cancer rates for females are catching up fast. Males still seem to have a slightly higher chance to develop cancer than females.

However, if we were to look at the number of cancers diagnosed for men and women over the years:

Cancer diagnoses for females have already surpassed males from 1998-2002 onwards. But this could be partly due to females forming a slight majority in the population.

So it depends on which data you’re looking at.

But these are the facts:

How would this play out in the future? Only time will tell.

7) Chinese in Singapore Accounted for 82.5% of All Cancer Cases

There are 3 major ethnic groups in Singapore: Chinese, Malays and Indians.

This is the breakdown of the population in 2017:

So the question is would cancer rates stay the same for everyone or would one’s ethnicity – eating habits, lifestyle, etc – have an impact?

Here are the cancer rates broken down by ethnicity:

Here are the cancer diagnoses broken down by ethnicity from 2013 to 2017:

But from this data, it’s seems to be disproportionate.

The Chinese people seem to have an even greater probability of contracting cancer compared to the rest of the ethnicity groups in Singapore.

In Singapore, the medical inflation rate is at 10% per year. So this means that the cost of hospitalisation and medical treatments are increasing at a fast pace.

If in the event one does develop cancer, what are the options?

Cancer treatments are available. But they are most effective when the diagnosed cancer is at an earlier stage.

At later stages, the effectiveness of cancer treatments are lower and the costs will be higher.

Surgery, chemotherapy and radiation therapy are the most common types of cancer treatments. And a combination of these treatments is usually recommended.

Fortunately, there are various ways to finance the cost of these cancer treatments.

9) Women Are More Likely to Survive From Cancer Than Men

Even after going through treatments, one might not be fully cured as cancer can come back and spread to other areas, leading to worsened conditions.

So what are the odds of surviving cancer?

Here’s a graph of the survival rates:

Whether it’s the 5-year or 10-year, females have a higher age-standardised relative survival rate.

Note: Although it seems that survival rates are increasing throughout the years, it might not be due to medical and technological advancements. Earlier detection can also lead to higher survivability. It can be a mathematical bias in which it “prolongs” the survival period.

Much have been said about early detection leading to an increased rate of survival.

Are there any numbers back it? We look at the data on how the stage of cancer affects the survival rate.

Here’s the graph of the 5-year relative survival rates by stages:

Here’s the graph of the 10-year survival rates by stages:

Hopefully, these statistics on cancer in Singapore can give you further insights.

If you’ve found them useful, share it with your friends and families to let them know about cancer – prevention is better than cure.