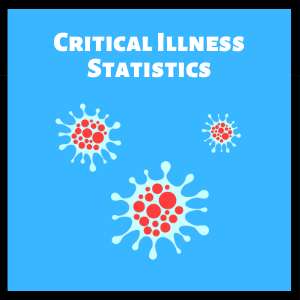 Are you looking for statistics on critical illness in Singapore?

Perhaps, you’re curious to know what are the probabilities of getting one?

In this page, we’ve compiled the most important facts and figures on critical illness in Singapore. And it’ll be updated from time to time.

Hopefully with this, you’ll gain further insights on this important topic.

A Primer on Critical Illness

The term “critical illness” or “CI” has different meanings depending on what you’re searching for.

In this article, we’re not looking at other illnesses or chronic diseases such high cholesterol, high blood pressure, and diabetes, but the focus is on the 37 critical illness defined by the Life Insurance Association Singapore (LIA).

The definitions to these critical illnesses are standardised across the industry to provide greater transparency. Do take note that these CIs are towards the later-stages of an illness.

The definitions of these critical illnesses (CI) may change from time to time. The most recent change was in August 2020. And the purpose was to provide greater clarity to consumers.

With that out of the way, let’s look at some statistics on critical illness.

1) Illnesses Are the Reason for a Huge Percentage of Deaths

Putting the LIA’s CI definitions aside, it’ll be great to know how illnesses and diseases of different shapes and sizes lead to death.

The Ministry of Health has put together some statistics on the principal causes of death in Singapore.

As you can see, cancer is the leading cause of death in Singapore at 28.4%. Along with other illnesses and diseases, they form the majority.

External causes of morbidity and mortality (e.g road accident traffic deaths) only represent 4% of all deaths.

And when we look at the causes of death claims (life insurance), cancer is also at the top accounting for 39.67%.

As the most common critical illness in Singapore, cancer will always be a hot topic.

It’s something you’ll have to pay attention to.

What’s the probability of getting a critical illness in Singapore?

Because it’s difficult to put one number to sum up all the probabilities of the different critical illnesses, let’s just zoom into cancer for now.

Looking at the statistics on cancer, about 38 Singaporeans are diagnosed with it each day. And every day, 15 Singaporeans die from it.

That being said, regardless of stages, the lifetime risk of developing cancer is 1 for every 4 to 5 Singaporeans.

To break it down further, men have a higher chance of developing cancer than women (the lifetime risk for men is 1 in 4 compared to 1 in 5 for women).

Take note: cancer is just one out of the many illnesses out there. If you factor others in, the chances of getting a threatening illness will be higher.

Contracting a critical illness is not the end of your worries.

The next biggest worry is whether you’re able to pay for the treatments.

With a high medical inflation rate of 10%, the cost of medical treatments are going to be expensive over time.

And these treatments may last for a prolonged period.

Zooming into cancer again, there are various ways to treat it. Surgery, chemotherapy and radiotherapy are the most common ones.

Even so, there’s no true cure for cancer. It can still come back. And so, there’s a constant need for diagnostic tests every year.

But there’s also another cost – the costs of not being able to work.

Your income is used for many other reasons such as daily expenses, future commitments and financial goals.

If you’re unable to work because of an illness, who’s going to pay these expenses? Can your family cope while taking care of you and making up for your loss of income?

So that’s why it’s crucial to replace your income if a CI happens.

4) Critical Illness Claims Account for 49.68% of All Life Insurance Claims

In life insurance, there are 3 main types of coverages: death, total and permanent disability (TPD), and critical illness.

However, if you factor in the causes of these death claims (a majority are caused by critical illnesses too), you’ll realise that CI plays a huge role in both CI and death claims.

While there are 37 critical illnesses in the LIA framework, are they all important?

Turns out that only a few matter.

But it’s even more disproportionate than that.

From the analysis we did on 36 months of life insurance claims, we made a few interesting findings.

Secondly, of all the CI claims, cancer accounted for a huge majority, standing at 73.17%. This supports the fact that cancer is the top critical illness in Singapore.

And this is also the reason why cancer-related benefits from early critical illness plans are important as the likelihood of it happening is higher.

Therefore, although it’s good to have a policy that covers 100+ conditions, only a few truly matter.

It is given that death claims usually happen at a later age.

How about critical illness claims then?

So although this could indicate a period of time when CI coverage comes in handy, you must take note that the data only includes inforced policies.

We now know that the chances of contracting a CI is high.

And the costs to treat it are correspondingly high too.

While hospitalisation plans (when it’s upgraded) pay out a substantial amount to cover the medical bills, the cost of not being able to work remains.

It can come in the form of a rider that you can attach to a term insurance or a whole life insurance. And there are also standalone early critical illness plans that primarily cover for CI of all stages.

These insurance plans pay out a lump sum when a CI happens. This money can then be used to “replace” your income during recovery and/or the period when you’re not able to work, thus enabling you to continue paying for family expenses and financial commitments.

Unfortunately, many Singaporeans are under-insured.

Which leads to this question: “do you think that this amount is enough for you?”

Knowing the importance of critical illness is one thing.

What are you going to do about it? Do you think you’re sufficiently covered right now?

If you have some time, estimate how much critical illness cover you need with our calculator.