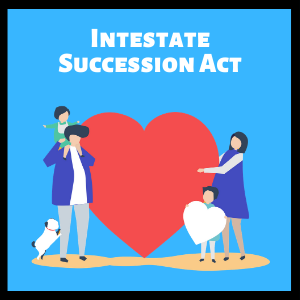 “How are your assets distributed after death?”

It’s not an everyday topic.

And it’s usually shrugged off because you didn’t think it was important at the moment.

But doing nothing has its implications.

It will go according to the law and the Intestate Succession Act in Singapore specifies the distribution rules.

The distribution seems simple but there may be negative implications when you leave it to the law..

What Is the Intestate Succession Act in Singapore?

When someone passes away without a Will, he is said to have died intestate.

Even if he has written a Will, if it’s revoked or deemed invalid, the assets may fall into intestacy.

And that’s when the Intestate Succession Act comes in.

It is an act that specifies the distribution of such intestate assets after death.

It covers most assets such as CPF (if there wasn’t a CPF nomination made), HDB, bank accounts, investments, etc. Insurance proceeds will also be distributed according to the law if there are no insurance nominations or any Will written.

This act does not apply to muslims as they’d be under a separate law.

What Comes Before the Distribution

Once death happens, all assets of the deceased are frozen.

The freezing happens because no one has the right to access and control these assets anymore, until a court order is applied.

When there’s no Will, a next-of-kin should apply for the Grant of Letters of Administration (court order).

After being appointed the Administrator, the next-of-kin will then be allowed to gain control and distribute the assets accordingly.

This is the lengthy legal process one has to go through when dying without a Will in Singapore.

How Are Assets Distributed According to Intestacy Laws

The intestacy law in Singapore specifies 9 rules for the distribution of assets.

These rules are summarised into a simplified table form:

3 Disadvantages of Leaving It to the Law

Here are some of the obstacles that your loved ones may have to go through if you leave the distribution to the law:

1) Delay in Settlement and Higher Costs

When you don’t specify certain aspects of your “estate plan”, more details need to be gathered and the court will have to decide.

There may even be delays in deciding who the Administrator will be.

This process can be lengthier as compared to having a Will (which has a lot more details spelt out already).

Not forgetting a longer time for your family to have access to your assets.

2) Disputes Over the Distribution Create Unhappiness

There are many stories in the news of families having disputes over a deceased’s assets.

That’s the last thing you would want your family to face, when you’re not around.

Even the minor of things could create displeasure within family members.

I’m sure you want everything to be smooth for your family.

But because of this, things can turn out to be the opposite of what you want.

3) May Not Be According to Your Wishes

Perhaps you may be thinking you’re still too young for these thoughts.

But here’s the truth: death can be unexpected and swift.

And if you’re caught off guard, the rules of the intestacy law will apply.

What the law wants may not be what you truly want.

So in a world where fairy tales may not exist, there’s one wish you can make that will always come true – a Will.

If You Don’t Want the Law to Decide

You can implement preventive measures to how your assets will be distributed with the basics of estate planning.

For the majority, there are 4 tools that you can consider utilising.

Firstly, you can make insurance nominations on life insurance policies that have a death benefit. This will be beneficial for your loved ones because they can get the insurance proceeds without going through the legal process.

Secondly, consider making a Will. This will ensure all your assets will be distributed according to your wishes.

Thirdly, make a CPF nomination. Why? Because you’re unable to include CPF monies in your Will.

And lastly, consider setting up a trust to be able to distribute your assets with a greater degree of flexibility.

It seems daunting but you just need to allocate a small amount of time to complete them.

And no matter what, they’re not set in stone, yet. You can change the details if your situation changes in the future.