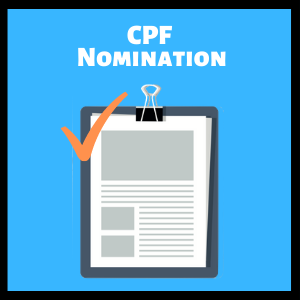 All Singaporeans – Citizens or Permanents Residents – will have a CPF account.

And with it, comes CPF monies.

And it’ll still be treated differently even upon death (more on that later).

Making a CPF nomination may seem like a tedious task, but it’s a critical element in proper estate planning.

When you’re taken out of the picture, your CPF monies don’t form part of your estate (treated differently from other assets).

And a Will doesn’t cover them.

Effectively, it’s on its own.

So if you didn’t make a CPF nomination beforehand, it may cost your family more time and money to access it.

But the biggest downside is that the distribution of assets might not be what you wished for – it’ll go according to the law.

Making a CPF nomination is free. And best of all, it can be done entirely online now.

There’s more to it though. Read on for the details and the exact steps to make one.

What is a CPF Nomination

A CPF nomination allows you to specify your nominees (beneficiaries who will receive the proceeds) and the exact percentages they can receive, when you pass away.

To be able to make a nomination, you need to be at least 16 years old and be of sound mind.

It isn’t compulsory to make one. However, it’s important that you do so.

And there are no fees to make one, anyway.

Who Can Be Nominated

Basically, any person or organisation (legal entity) can be nominated.

There is no limit to how many nominees you can have.

But depending on the mode of making one (online, hardcopy form, service centre), there may be limitations.

And if your nominee falls under these 3 groups, you‘d need to pay more attention:

If your nominee is below 18 years old when your death happens, the proceeds will be held with the Public Trustee Office (PTO) till when he reaches 18 years old.

There’s a charge for this:

The above are one-time fees and are taken from the CPF monies.

But the money doesn’t just sit there, it’s invested and interests are earned.

However, there’s a charge on the interests earned:

The deceased’s CPF monies would be paid to a Donee or Deputy of the nominee.

They’re supposed to act on behalf of the nominee’s best interests.

If your nominee remains an undischarged bankrupt when he’s entitled to the CPF savings, the CPF Board will need to inform the Official Assignee (OA).

The proceeds may be transferred to the OA instead.

What Types of CPF Savings Are Involved

A CPF nomination will not include everything in the CPF universe.

It only applies to certain CPF accounts you have.

If you’re interested, learn more about how CPF for retirement works.

The 3 Types of CPF Nominations You Can Make

There are 3 types of CPF nominations available:

But there’s only 1 nomination most Singaporeans make, and that’s the Cash nomination, which happens to be the default option.

Here’s an overview of them:

What Happens to CPF Monies After Death

This section will show the importance of making a CPF nomination.

It doesn’t matter whether there’s a Will or not because it can’t include CPF monies.

So then, there’s really only 2 scenarios: death happens without a nomination and with a nomination.

When you pass away without making a CPF nomination (or it was revoked), the CPF monies will not form part of your estate.

Any creditors that you may have might not be able to claim on those CPF monies (meant for your loved ones).

But you also can’t include the distribution of CPF monies in a Will.

It will ultimately be distributed according to the intestacy law in Singapore – Intestate Succession Act – or the muslim law.

It’ll take time to find the legally-entitled beneficiaries. And the distribution will be handled by the Public Trustee’s Office (PTO).

And because of that, the PTO charges a fee (minimum of $15):

These fees will be taken from the CPF monies.

Thereafter, to receive the funds, your beneficiaries need to submit the required documents (death certificate, NRIC, etc), and it can take 4 weeks from a complete submission to receive the CPF money.

So, there are 3 disadvantages of not making a CPF nomination:

The disadvantages of not making the nomination are eliminated.

Your CPF monies will be distributed according to your wishes.

The processing time could be faster.

And there will be no fees involved.

These are the reasons why making a CPF nomination is so important.

It makes it extremely simple for your loved ones after you’re gone.

It doesn’t cost a single cent for you to make one, and you just need to allocate some time to complete it (detailed steps coming soon).

At any time, you can always change details of your nomination to suit your situation.

How to Check Whether You Have an Existing Nomination

Step 3: Login with your SingPass

Step 4: On the left hand panel, click on “My Messages”

If you don’t have a nomination, you should see this:

3 Ways to Make a CPF Nomination

As mentioned, there are 3 ways you can make a nomination:

This option wasn’t available until 2020.

By far, it’s the most convenient method. But you can only indicate up to 8 nominees – enough for most.

Just take note that an online nomination would only be for the Cash nomination.

You’d have to download the form and print it out.

It also has to be signed off by 2 witnesses.

After that, it can be sent via post to CPF.

The customer service executives can act as the witnesses.

But do prepare the details of your nomination beforehand to save everyone’s time.

The customer service centre will also be able to do the non-default options – Enhanced Nomination Scheme and the Special Needs Savings Scheme.

For the detailed steps to make a nomination, I’ll only cover the Online option.

How to Make a CPF Nomination Online (5-Step Process)

This is the most convenient way, and going forward (especially in the post-Covid era), this should be what the majority will do.

You can’t do a CPF nomination online without the SingPass.

Step 2: Gather Information on Your Nominees

You have to decide who and how much percentage your nominees will receive.

Get a notepad handy – digital or physical – and write the information down. The next few steps will also require other information.

These are the information needed from your nominees:

Step 3: Consider Whether to Have an Authorised Person(s)

You can choose not to disclose any details of your nomination or your CPF accounts to anyone.

If so, even your spouse or family members don’t have that access. They can’t even call in to check whether they’re your nominees or not.

However, after your death, these information can be released upon request to:

And it’ll be done together with the CPF nomination.

Here are the details needed for an authorised person:

Step 4: Gather Information on Your Witnesses

You’d need 2 witnesses who are at least 21 years old, of sound mind, and hold SingPass accounts.

They can’t be your nominees. And you can’t be a witness to your own nomination.

They won’t have access to your nomination details (if they’re not authorised persons).

When you shortlist the 2 witnesses, do let them know about your intention, because when you make the actual online nomination, they have 7 calendar days to acknowledge it.

In return for their time, you can also be their witnesses. Just share this article with them and all of you can do it at the same time.

Or just share it with a group of friends and see who wants to be each others’ witnesses.

Requirements to be a witness (need 2):

These are the information required from the witnesses:

When you’ve done the previous steps, this final step is the easiest.

On the left hand panel, click on “My Requests”

Check your details and read the notes..

And then check the box and “Start”

With the information you’ve gathered, enter your nominee’s particulars

After adding in the particulars of each nominee, click on “Add this Nominee”

Add more nominees if needed, if not click “Next”

Next is the Authorised Person(s) section.

If you have any authorised person(s), you can add in the details, then click “Add this Authorised Person”

Then, add more if needed, if not click “Next”

Next is the witnesses’ particulars section.

Enter the details of the 2 witnesses. And then click “Next”

You’ll be at the final step – the submission page

Verify all details are correct.

All information on your nominees, authorised person(s), and witnesses will be shown.

Read through the declaration, confirm you’re not a robot and click on “Submit”

And you’re done with your part.

Your witnesses then have to do theirs.

What Happens to an Existing CPF Nomination..

The status of your existing nomination can change depending on the below scenarios:

After getting married, your existing nomination will be automatically revoked (made invalid).

And if death happens after marriage, then the CPF monies will be treated as if there wasn’t a nomination made – distributed according to the intestate law, etc.

So it’s a good practice to make a new nomination.

Getting a divorce will not cause your existing nomination to be revoked.

It will still stay the same.

The idea behind that is because you may still want to provide for them even though they may not be in your life anymore.

If not, you can just make a new nomination.

This will be the same as getting married.

Your existing nomination will be revoked automatically.

Likewise, do make a new nomination.

Your existing nomination is not automatically revoked.

After a nominee passes away

If a nominee dies before you, your existing nomination is not revoked.

And if you do pass away after that, the deceased nominee’s share will be distributed to the surviving nominees in the same proportion to their specified allocation.

If there are no surviving nominees, then it’ll be distributed under the Intestate Succession Act or the muslim law.

So do consider making a fresh nomination if needed.

How to Change (or Revoke) a Current CPF Nomination

If you wish to make any changes – changing the nominees or the percentages – you can submit a new nomination.

This will “override” the existing one that you had.

Hopefully by now, you’ve gained some insights on CPF nominations in Singapore.

If you haven’t done so, do set some time to go through the steps to make a nomination online. I’ve already made it simple for you by detailing the step-by-step process.

And if you’ve already made the nomination, great.

There are still other aspects in estate planning to consider too.

Firstly, making a nomination on your insurance policies (with a death benefit) will enable your family to receive the insurance proceeds without going through the legal process. This will provide liquidity.

Secondly, even if you’ve made nominations on your insurance policies and CPF monies, all other assets will still be in “limbo”. And if you die without a Will, they’ll still be distributed according to the law. So consider making a Will to cover all these other assets.

As a bonus, do take a look at setting up trusts to reach the full potential of what estate planning tools can offer.

With these 3 tools – insurance policy nominations, CPF nomination, and a Will – your family will have an easier time (when they’re going through a tough time not having you around).