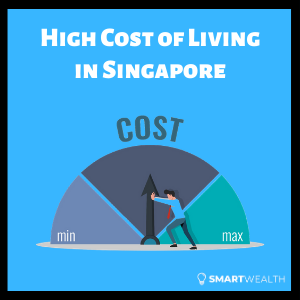 Southeast Asia (SEA) is known to be a region for cheap travels.

In general, living expenses such as rent and food are very affordable in this region when compared to the rest of the world. This attracts and enables backpackers from all around the world to explore SEA for months on end.

However, Singapore is a country that stands out for its higher costs of living.

Is it entirely true that Singapore is an expensive country?

Today, we’ll explore why the cost of living in Singapore is perceived to be so high.

A Little About Singapore

For six out of the past seven years (2014-2020), Singapore was named the world’s most expensive city according to the Economist Intelligence Unit (EIU)’s Worldwide Cost of Living.

That says a lot as Singapore is just a tiny red dot on the world map, measuring only 50 km from east to west and 27 km from north to south.

How did this small country get such a name for itself? Well, as a result of strong economic growth over the years, the cost of living (and the standard of it) has inevitably risen due to inflation.

So, is Singapore really that expensive?

To answer this, it must be noted that the EIU’s report comes from a viewpoint of an expatriate and not a local. As such, when you factor in various government subsidies, day-to-day living expenses of a local, etc., the cost of living as a Singaporean is much more affordable than what the report portrays.

But whether you’re a local or not, living in Singapore can still be seen as pricey. Here are some of the reasons why.

Land scarcity is perhaps one of the most contributing factors to high costs in Singapore.

With a growing population of Singaporeans and foreigners, careful planning to maximise the use of land is critical.

The government tries to reclaim as much land as possible, but there is only so much that can be done.

The lack of land space leads to other cost issues (more details later).

One may say that Singapore has few, if any, natural resources.

It does, however, have a few competitive advantages, the strongest one being its port’s strategic location on the world map, connecting the East-West trade.

Singapore was ranked the world’s top maritime capital for four straight years and is the second busiest port in the world. The Port of Singapore is likely responsible for Singapore’s enduring success throughout the years.

While the potential creation of the Kra Canal in Thailand – through which ships would then be able to bypass Singapore – may hinder port activity in the future, the government has made plans to ensure continuity of its ports. Moreover, Singapore has been careful to not place all its eggs in one basket by diversifying into other activities that generate GDP.

Having said all of that, if you take away the port, Singapore is simply a plot of land.

Why? Some basic necessities have to be acquired externally.

Secondly, more than 95% of Singapore’s electricity is generated from imported natural gas, mostly coming from Malaysia and Indonesia.

Not only does relying on others for basic needs come with additional costs, it can leave Singapore in a precarious situation should tensions arise.

Singapore’s land is a prized commodity.

As a result of a growing population, the demand for property has been increasing, yet the supply is limited, causing property (and rental) prices to go up.

The median price of an HDB flat is S$495,000, while a private condominium costs S$1,467,778. Of course, the closer the property is to the central region, the more expensive it will be.

If you’re a Singaporean, government policies such as the subsidising of HDB flats and offering grants allow such properties to remain affordable, no matter which income group you belong to.

However, if you’re a foreigner, be prepared to pay a lot more. Apart from regular taxes, foreigners need to pay an Additional Buyer’s Stamp Duty (ABSD), which is 30% of the purchase price or the market value of the property – whichever is higher.

With high costs to purchase a property, rental prices will be high as well.

The starter kit of a Singaporean is to get good grades and then get a good job. This mindset has been cultivated over the years, and one can see the reason why.

As Singapore doesn’t have land or natural resources (apart from its port), it has to rely on its people.

It invests heavily in education, knowing that human capital is needed to support an influx of multinational corporations (MNCs), which the government has attracted with favourable policies such as low corporate tax rates, ease of doing business, etc.

Better education not only provides economic returns for the individual, but also for the corporation it serves as well as the economy of the nation.

Today, this emphasis on education is still prevalent.

Parents are willing to invest in their children so they can achieve success both inside and outside of the classroom. They want their kids to get into the best schools, and often enlist them in private tuition and enrichment classes.

With such a strong demand, the costs of education have increased. Over the past 20 years (2001 to 2021), the average education inflation rate was 2.87%, while the average headline inflation was 1.54%.

While Singaporeans enjoy subsidies by the government from pre-school to tertiary education, foreigners pay the full price. It costs even more if you send your kids to an international school.

So whenever you see a foreign student in Singapore, you can expect that they either come from a well-to-do family or they’re on a sponsorship.

Because of Singapore’s small size, if everyone were to own a car, the roads would be congested and there would not be enough places to park them.

That’s why the government limits private car ownership through elevating the costs of owning one, making Singapore the most expensive place in the world to buy a car.

It doesn’t matter whether you’re a local or not, owning a car in Singapore is expensive.

Fortunately, because of its compact size, it’s easy to get from one place to another via public transport (e.g., buses and trains).

By public transport, it takes around two hours from one extreme end to another, but for most journeys, commute time is shorter.

In general, public transport is affordable and will suit most needs. However, if you prefer comfort and/or need to get to another place fast, private hire cars (e.g., Grab) and taxis aren’t that costly either.

6) Singapore has to import food from other countries

As such, you won’t see a lot of land meant for agriculture. In fact, more than 90% of all food consumed in Singapore is imported.

Having to rely on others for food places Singapore in a tricky situation.

Not only can food supply interruptions happen (which the government counters via various strategies), importing food comes with additional costs, and Singapore has to accept the prices (and their increases) from its suppliers.

Nonetheless, to a consumer, a large variety of food is available at different price points.

In most countries (including Singapore), buying groceries and cooking for yourself is the most cost-saving option.

Dining out tends to cost a little more (because of rental and labour costs in producing cooked food), but it can still cater to everyone’s budget.

For the budget-conscious, hawker centres, coffee shops, and food courts are everywhere. A typical meal at these locations costs less than S$5. If you want to indulge, restaurants are ample, too.

7) Healthcare costs are increasing at a fast pace

The other contributing factor to human capital, apart from education, is healthcare.

Thus, the government spends billions a year on healthcare to ensure its people stay healthy, which then increases overall productivity.

In recent years, external sources say that our medical inflation rate was at 10%. And when we look at national data, the average healthcare inflation rate in Singapore was 2.21% over 20 years (2001-2021).

This meant that the cost of healthcare increased at a faster pace than the general cost of living.

Here are some of the reasons for rising healthcare costs:

As usual, Singaporeans get subsidised heavily if they go to a public hospital. Coupled with a compulsory medical insurance, MediShield Life, a substantial portion of the bill can be claimed. For better coverage, they can upgrade their medical insurance with an Integrated Shield Plan, enjoying advanced coverage from private hospitals.

However, for foreigners, the full rate is payable.

As a nation progresses, the lives of its people naturally improve.

While some may indeed slip through the cracks, there are channels available to help them.

For most, in my opinion, basic necessities are met, and when those needs are satisfied, one would look to improve the quality of life.

This is where you’ll see more spending in the category of comfort and luxury items. For example, Singaporeans generally love to eat good food and travel abroad.

As a result, overall spending and the cost of living will increase.

What Can You Do About Rising Costs?

In summary, the cost of living differs greatly whether you’re a local or not.

For most locals, living expenses can be affordable or costly depending on your needs and wants. However, for expats and foreigners, you can expect certain expenditures to be on the higher side.

Regardless, one important aspect people tend to neglect is budgeting and financial planning.

You see, while the prices of goods and services are outside of our control, how we deal with our finances is entirely within our control.

However, one in two adults in Singapore don’t even know how much they spend every month.

Without knowing our expenses and being deliberate about how much should be allocated and on what, overspending tends to happen. And when this issue gets compounded throughout the years, it leads to having little or no savings left, which results in costs being perceived as expensive.

If you’re already saving a healthy amount, keep at it, and do capitalise on various alternative investments rather than letting cash stay stagnant in the bank. That way, you’ll beat the rising cost of living, and you’ll have more money to enjoy in the future.

Also, don’t forget to put in place the different types of insurance plans out there, so that if anything happens, your expenses and financial commitments can continue to be paid off.