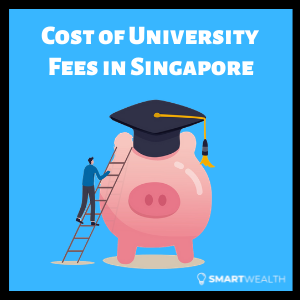 Education has always seen strong demand in Singapore, driven by parents wanting their children to get into top schools, whichever grade they’re in.

Getting into the best schools isn’t easy and requires good grades, so parents often enlist their children into private tuition and enrichment classes.

As a result, the cost of education has risen significantly over the years.

A university education, the last hurdle for most students, is the costliest of all types of education.

Today, we take a deep look into how much a university degree in Singapore can cost and the average cost of getting one.

Note: All prices are quoted in Singapore dollars (SGD).

The nationality of a university student will determine the subsidies (MOE Tuition Grant) they can receive. Singapore citizens receive the highest level of subsidies, followed by Singapore permanent residents, and then international students. A student who doesn’t wish to apply for or accept the MOE Tuition Grant will have to pay non-subsidised rates.

In addition to tuition fees, the estimated cost of living for a student is $10,300 per year; hence, the total living expenses for four years amount to $41,200.

An Overview of the Cost of Education in Singapore

Let’s look at some statistics.

Due to increased demand, the cost of education has increased by 76.1% over the past 20 years, while the headline inflation only increased by 35.8%, suggesting that schooling is becoming more expensive at a faster pace than the general cost of living.

The annual education inflation rate has always been positive since 2000, except in 2020, when the local universities decided not to raise tuition fees.

We’ve also computed that the average annual education inflation rate from 2001 to 2021 was 2.87%. (Knowing this is handy to project the future cost of university fees.)

Over that same period, the average headline and core inflation rate was just 1.54% and 1.49%, respectively.

This could be why the majority (2 in 3) of respondents think that getting a degree is expensive, from a survey we conducted. However, a good number still believe it’s worth it.

There are currently six autonomous universities in Singapore:

Having said that, accepting the tuition grant does come with conditions. While Singapore citizens don’t need to serve a bond after graduating, PRs and international students must work for a Singapore entity for three years after graduation.

Those who don’t wish to apply or accept the tuition grant have to pay the non-subsidised fees.

As such, university tuition fees can be divided into four categories:

For each of these categories, we’ll compare the fees of different courses from the six schools. We’ll then be able to derive the range of school fees and the average course fees.

Note: To be able to compare university course fees across the board and present our findings in a simple and meaningful way, we’re making a few assumptions. We’ve excluded the costlier courses such as medicine and law. Most degrees in Singapore take three to four years to complete, so in order to be prudent in our estimates, we assumed a four-year course duration when the total estimated course fees were not available. In tabulating the average course fee, we simply took the average of the lower and upper limits of the total estimated course fees.

Here’s a summary of the university course fees for Singapore citizens in 2021:

Dentistry is offered only by NUS, costing the same as its medicine course, but the course duration is only for four years. The total course fees amount to $117,200.

Here’s a summary of the university course fees for Singapore permanent residents in 2021:

Here’s a summary of the university course fees for subsidised international students in 2021:

Here’s a summary of the university course fees for non-subsidised students in 2021:

In general, most students would prefer to enrol into globally-ranked universities such as NUS and NTU.

However to meet the changing needs of consumers, private institutions such as PSB Academy, Singapore Institute of Management (SIM), and James Cook University are offering attractive study options too.

As such, their prices may vary greatly. At times, they are as competitively priced as public universities even for those who do not qualify for the MOE Tuition Grant.

Course fees at private institutions can vary from below S$20,000 to S$50,000 for bachelor’s degrees programmes. Studying abroad will be an even more expensive option.

Other Costs on Top of Tuition Fees

Tuition fees are not the only costs you should be concerned about.

Other costs can be broken down into costs related to studying and the cost of living.

As for a student’s cost of living, here are some estimates:

How to Save for Your Children’s University Education?

In summary, Singaporean students enjoy the greatest amount of subsidies and the average course fees are $37,850. If you want your child to study law or medicine, it’s going to cost a lot more. Moreover, you’d still have to factor in living expenses, which can amount to $41,200 for four years.

The total cost of a university education then becomes about $80,000 in today’s value.

The first step to save for your children’s education is to decide where you want to send them. Next, after finding how much it’ll cost, you’ll have to forecast future costs by factoring in inflation. You can simply use our education fund calculator.

From that calculation, you’ll be able to determine how much you should have when your child is ready to enter university.

Also, do check out various ways to help you fund your children’s education (e.g., a child education savings plan).

Do remember, before you start to save for your children’s education, ensure that you have the basic insurance policies in place.