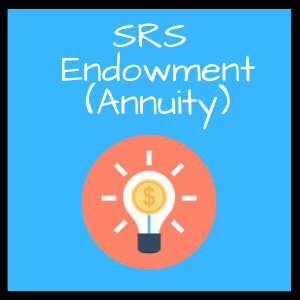 So you’ve already contributed to your SRS account, with the intention to reduce taxes, but you know that only solves half of the problem.

The other half of the problem is that the balance in your SRS account is only earning 0.05% interest per year.

Because of that, inflation could negate the benefits you get from contributing.

There’s a variety of investment options for SRS funds out there, but you’ve narrowed your interest down to the SRS endowment/annuity plan.

In this guide, you’ll learn everything about it.

This page is part of the SRS 4-Part Series:

Policies have an extra layer of protection.

Insurance products bought with Supplementary Retirement Scheme (or with cash) are usually protected by the Policy Owners’ Protection Scheme which is administered by the Singapore Deposit Insurance Corporation (SDIC).

In the event that a life insurer were to fail, MAS’s preferred course of action is to transfer the insurance business of the failed insurer to another.

And if the business cannot be transferred? SDIC may take over and cover existing policies (with caps).

MAS’s objective is to ensure policy owners are not heavily impacted.

What Type Of Insurance Products Can You Buy with SRS?

There’s a wide array of insurance plans you can purchase with cash.

Can you do the same with SRS funds? Unfortunately, you can’t just buy any insurance you like.

Taken directly from the Ministry of Finance, here are the conditions for any insurance products purchased with SRS:

So if you’re asking what type of insurance you can buy with SRS?

There’s really only one option.

Only One Choice: The Single Premium SRS Annuity Plan

First off, your SRS monies are meant for retirement. It’s not called the Supplementary Retirement Scheme for nothing.

It’s meant for your own consumption, and not meant to be left for your family (which is why you can’t make a nomination).

Extra fact: if death happens, the SRS balances form part of your estate and will be distributed according to the will or the estate law (if there’s no will).

So because of the above conditions, insurance companies can only design a product that have a very low (or negligible) insurance coverage but geared towards higher retirement income payouts.

You’d only be concerned with the returns you can get from your SRS investment. For insurance matters, there are other products that are more suitable, such as term plans or whole life plans.

How Does a SRS Annuity Work?

At the start, you’ll need to allocate a single premium lump sum for the annuity plan.

Then, at the selected retirement age, you can start receiving a regular stream of retirement income.

And you’ll receive this income for a fixed number of years (income payout period).

The above is just a general overview of how it works. I’ll touch more on the specifics later in this article.

The Returns on a SRS Retirement Plan

One unique benefit of an SRS annuity plan compared to other SRS investment options is that it’s usually capital guaranteed upon maturity.

Meaning, you won’t lose your principal as long as you hold it for the entire period.

But what’s more important are the returns you can get from the plan.

With the combination of guaranteed and non-guaranteed income, an annuity plan tries to achieve potential returns of around 3-4% per year.

The expected returns will vary according to different factors like length of accumulation period, income payout period, etc.

Here’s an illustration (shouldn’t be taken as a recommendation):

This is almost double of what he has put in.

Are the Returns Subjected to Income Tax?

In case you don’t already know, all payouts from the annuity plan (or from any other investments made using SRS) go back into the SRS account. And from there, you’ll have to withdraw it out.

If you’ve read my other guide on what is SRS all about, you’ll know that investment returns from your SRS investments, including the endowment plan, are tax-free.

However, the amount withdrawn is still taxable.

The best period is withdraw is after the prescribed retirement age (currently at 62) as there will be no penalties, and only 50% of the withdrawn amount is taxable.

I’ve explained this in detail in that guide, but to put it simply, you need not pay any taxes on withdrawals up to $40,000/year (assuming no other income and for a 10-year period).

That’s why it’s much better to spread your withdrawals rather than withdrawing it one shot.

Which explains the usefulness of an annuity.

The 7 Moving Parts of a SRS Annuity Plan

These are several factors to consider if you want to purchase an annuity:

As mentioned earlier, insurance coverage should not be a priority. The priority goes to the returns you can receive.

Therefore, you won’t see any high insurance coverage amount in such plans. For example, the death benefit is usually 105% of all the premiums you’ve paid plus any bonuses declared.

With negligible coverage, these policies are often guaranteed to be issued. No matter what kind of health conditions you have, minor or major, it doesn’t matter.

You can still apply and it’ll go through, as there is no medical underwriting.

Back in the day, endowment plans may not be capital guaranteed.

So technically, in the event that an issuer does not declare any bonuses every year, the amount you get back may be lower than the amount you’ve put in.

However these days, most plans are capital guaranteed upon maturity.

So long as you hold it for the period that’s intended, you don’t need to worry about losing your principal.

I see this as the most important aspect of an annuity plan.

Being able to know how much you’re going to receive many years down the road is important, so that you can plan properly for retirement.

If not, everything will just be a guesstimate.

It’ll be hard to plan for your retirement if everything is uncertain (or have no guarantees).

If you’ve bought an endowment or a savings plan before, you’ll know that the non-guaranteed bonuses play a role to the total returns you can get.

Insurance companies do strive to maintain bonuses every year, as if they don’t, it could negatively affect their reputation.

However, the fact is this: the wordings are in black and white.

This is why I place a higher emphasis on the guaranteed portion.

For an endowment plan bought with SRS funds, you would want the selected retirement age to be at least 62 years old.

Why? Because there won’t be a 5% withdrawal penalty and only 50% of the withdrawn amount is taxable.

But, no all SRS endowment plans have the option to start paying out the income at 62 or 63 years old.

Most plans have the option to start at 65, which in my opinion, is still an acceptable age, especially when the official retirement age in Singapore will be changing to 65 by 2030.

There are several options here.

Depending on the plan, the payouts can be for 10, 15, 20 years, or for lifetime, starting from the retirement age.

Generally, a longer income payout period translates to a lower retirement income, with all things the same.

So the question is whether you want to have a long payout period?

For me, I would prefer a 10-year income payout starting from 65 to 75 because that would be the prime period.

Beyond that, I may not need that much anyway (or probably can’t even enjoy it).

Most plans are just plain-vanilla, as the focus is on the savings element.

Some plans do have secondary benefits.

For example, if a severe disability happens during the income payout period, you’re entitled to receive additional payouts.

The 2 Main Disadvantages of Plans Purchased With SRS

First off, if your risk tolerance is low, you wouldn’t be comfortable with volatile investments in the first place.

But if your risk appetite is higher, and for example, you gave up investing in ETFs and opt for the endowment, if in the future the ETF performs well, it’s an opportunity cost to you.

(However, the opposite can be true as well)

It’s usually not advised for you to surrender the plan before its maturity.

This is because your surrender value might be lower than the amount you’ve put in.

So if you do intend to put your SRS funds into such plans, you must hold it for the long haul.

But in return, if you’ve held it for the entire period, you’re entitled to receive the guaranteed and non-guaranteed benefits.

The Pros and Cons

To get more out of your SRS contribution, you can invest your funds.

If you don’t wish to take unnecessary risks, SRS annuities are a great option because they offer guarantees and allow you to participate in upsides.

Take the next step by finding the best SRS endowment annuity plan by getting a comparison now.