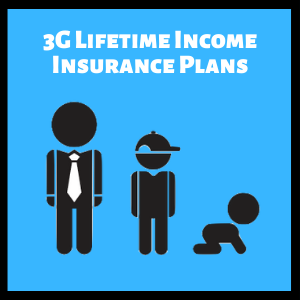 How do we benefit ourselves, our children, and our grandchildren with a single plan?

It’s one type of plan that can have a strong impact on the people around you – enabling them to do more even when you’re not around anymore.

Read on to find out more!

This page is part of the 3G Lifetime Income Plan 2-Part Series:

Leaving a Legacy Behind

There comes a point in time when you’re self-sufficient.

You have your all basic financial needs planned out – adequate life insurance coverage, a sizeable amount of retirement funds, and children’s education catered for already.

And then you ponder about the inevitable – death.

Apart from advance care planning and estate planning, you start to think about your children and their grandchildren.. how do you want to leave a mark behind?

This is where legacy planning comes in.

It ensures that the money you’ve worked so hard to earn over the decades can be properly passed down to the next generation and the generations after.

But it doesn’t end there.. you also want to maximise this amount of wealth, so that they can be impacted even further.

That’s why legacy plans are in demand these days.

Other Types of Legacy Plans Available

For the purpose of leaving a greater legacy than before, there are various tools available to you.

These legacy tools are unique from each other and will suit the different needs of individuals.

There’s the regular term insurance that everyone knows about, which usually provides coverage until a fixed age (e.g 65, 70, 80).

Such plans are meant for income protection.

Meaning if death happens prematurely, the insurance proceeds can relieve the financial burden faced by the family members.

But these plans expire when the coverage period ends, and you don’t get anything back.

So with the introduction of term till 99 years old, the needs of income protection and leaving a legacy can be fulfilled.. simply because the chance of claiming is almost certain.

It provides income protection as well as cash value.

So how are single premium jumbo whole life plans different? They’re funded with just one lump sum at the beginning and it only has death coverage.

The main objective is such: if you have a set amount of money that you want to leave for your loved ones, you can put it into such plans. And when death happens, they can receive a multiple of that amount you’ve put in.

Universal life insurance plans also provide some form of coverage and to cater to accumulation needs.

There are 3 types of universal life plans – traditional, indexed, and variable.

The difference between them is the way they accumulate cash value.

They are usually funded with a single premium and/or regular premium, depending on your needs.

One downside is that they might not have a guaranteed life coverage (i.e till 99 years old), which can be a crucial factor if you’re thinking of leaving it for your next gen.

The plans mentioned above are generally geared towards leaving more for your loved ones, because the death benefit.

Purpose of a 3G Plan

Why is it called a 3-Generation plan? Because the benefits span across the 3 generations.

There are 3 main objectives:

Let’s take a look at the mechanics of how it works.

How Does a 3G Lifetime Income Plan Work

Here’s an explanation of how it works, and I’ll give you the specifics after.

If you have an excess sum of money that you don’t know what to do with it, but you know you want your daughter to have it one day..

You can put this amount into the 3G plan, with you as the policyowner, and your daughter as the life assured (because your daughter would likely to outlive you; get the most income).

After 5 years, you can receive a regular income. If you don’t have any use for this income at that point of time, you can just leave it inside to be “reinvested”. The income left inside can still be withdrawn out in the future if you need it.

Let’s say your daughter is old enough (e.g 35 years old), you can transfer ownership to her.

She can now receive the income (if she doesn’t need the income, it can still be left in the plan).

Hopefully by then, she has her own family with kids (your grandkids). The policy will still benefit them as if she were to pass away, there’ll still be death benefit payout.

So that’s an overview of how a 3-Generation plan works.

An Illustration with Numbers

Let’s look at the specifics. These numbers are entirely illustrative and should never be taken as a recommendation.

Details of the Plan:

Assuming this income is withdrawn by James till Jessie turns 50 years old, and then ownership is transferred to her.

Jessie then continues to withdraw out the income till when she’s 85 years old.

Death benefit that can be paid out to her children: $1,494,500 (comprises of guaranteed and non-guaranteed) and the plan terminates.

If the income is instead “reinvested” throughout and not withdrawn, the surrender value and death benefit will be much higher.

Another great point of such a plan is that it’s scaleable – up or down.

Features of a Good 3G Plan

While there are many insurance companies that provide such plans, they might not have the same features.

Usually, it’s best if you do a comparison.

But here are some features that you may want to look out for.

3G plans are for the long haul.

If you’re thinking of surrendering/terminating the plan in the short term, then it’s not suitable for you at all.

Reason: in an early termination, your surrender value might be lower than the “principal” you’ve put in.

On the insurance company side, they take a long term stand with such plans. An early break will also negatively impact them.

Of course, this surrender value would grow, but it takes time.

Having said all these, if the need really arises because of unfortunate events, there is an option to surrender. But take note, the “day-one” surrender value could just be 80% of your “principal”.

The income you’re entitled to receive is comprised of guaranteed and non-guaranteed income.

Although both make up the income portion, my personal opinion is that the guaranteed income holds more weight.

Why? Such plans are meant to be held for a very long time, and so there are uncertainties such as whether insurance companies can generate returns to payout what was initially illustrated. The non-guaranteed portion is heavily dependent on that.

Which is why the guaranteed portion provides greater certainty.

This is also not to say that the non-guaranteed income doesn’t matter. It matters too. I just see it as a bonus.

If you have medical conditions and applied for insurance, you’ll know that it can be a big hassle.

Health declarations need to be made and medical reports need to be shown. And at the end of the day, you might still get exclusions or get rejected.

So with these lifetime income plans, they only provide negligible death coverage. The whole point of it is to cater more for wealth accumulation purposes.

Therefore, they’re usually guaranteed to be issued. Means, it’ll get approved no matter what kind of health conditions you have.

So if you do have serious health conditions, other legacy plans such as the term till 99 or the jumbo whole life plan might be out of the picture, and so 3G plans can be the next best alternative.

As mentioned, the 3G plans are meant to be held for the very long term.

And surrendering in the short term will not be beneficial to you.

However, if you’ve “reinvested” the income that was supposed to be paid out, you can make withdrawals on them along the way.

This allows you to still retain the plan but just make the withdrawals for liquidity purposes.

5) Ability to Name Your Child as Life Assured

Most plans last till at least age 99, no matter whether you’re young or old.

In order to extract the most value, the plan should allow you to name your child as the life assured, and you as the policyowner.

This ensures that the plan will last for a longer time.

When your child turns of age, and you don’t need the income anymore, you can simply transfer the ownership to him/her.

In the grand scheme of things, there are several tools out there to address the concern of leaving a greater legacy behind.

A 3G lifetime income insurance plan is just a tool.

If you want to know more, find out which is the best 3G lifetime income insurance plan in Singapore.

Apart from that, if you do want to leave a legacy for your loved ones, take some time to know more about estate planning which deals with everything when death inevitably happens.