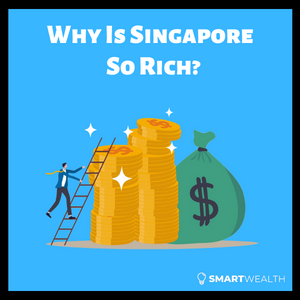 You may have heard that Singapore is run like a corporation, and a successful one at that.

The country has seen significant growth in GDP since its independence back in 1965, and now its GDP per capita is amongst the highest in the world.

The coffers of Singapore’s government and its population have grown in size too.

How rich is the country and its people? And how did Singapore get so rich in the first place?

Today, we explore the answers to these questions.

Singapore Used to Have Nothing

Back in the day, Singapore had one of the world’s worst slums, according to a 1947 British colonial government Housing Committee Report.

Singapore also didn’t have the luxury of any significant natural resources, such as oil, coal, or gas. These are assets that can be used for the country’s own use or to be sold to others.

Furthermore, Singapore is simply a small plot of land that measures 50 km from east to west, and 27 km from north to south.

The odds were stacked against the survival of this tiny island.

One can say that the turning point was when Singapore became an independent nation, with the late Lee Kuan Yew as the prime minister.

How Rich Is Singapore Now?

Singapore’s gross domestic product (GDP), one of the key indicators for economic progress, has grown by 183% over the past 20 years. The total GDP (at current prices) in 2020 was S$469.1 billion.

Besides that, Singapore is rich in terms of how much money it holds.

Here are the three organisations in Singapore that manage the country’s reserves and their holdings:

In total, Singapore has assets of at least S$1.05 trillion or US$777 billion. The actual figure is likely to be higher as the size of GIC’s fund is “well over US$100 billion”.

According to the Sovereign Wealth Fund Institute (SWFI), the two sovereign wealth funds, GIC and Temasek, are ranked 6th and 7th in the world, respectively, in terms of total assets.

Singapore is also one of the 11 countries in the world to have a credit rating of AAA, signifying strong credit worthiness.

Are Singaporeans Rich As Well?

The country seems to be doing well. How about its people?

Let’s take a look at two financial components: income and wealth (or net worth) of the population.

Over the past 10 years, the median gross monthly income (including employer CPF contributions) has increased from S$3,000 to S$4,534. This is for full-time employed residents.

And to further investigate the wealth of the residents in Singapore, we’ll look at the Credit Suisse Research Institute’s Global Wealth Report 2021.

The adult population of Singapore holds a total estimated wealth of US$1,627 billion, or US$1.63 trillion.

According to the report, there are 269,925 millionaires, of which 60 are worth more than half a billion dollars. Some of the richest people in Singapore include Eduardo Saverin, Forrest Xiaodong Li, and Wee Cho Yaw.

While these statistics show there are plenty of rich people in Singapore, there still remain 720,000 adults in Singapore who have less than US$10,000 in wealth.

Income and wealth inequality in developed countries is a common occurrence. If we were to factor in the increasing cost of living in Singapore, would those in the lower-income groups be able to cope?

Fortunately, the government has made combating inequality a national priority and has been reducing it over the years. It does this with the use of government transfers (GST vouchers, CPF top-ups, etc) to redistribute wealth to lower-income families. In 2020, an average of S$13,670 in government transfers, the highest in any given year, were given to each household member staying in HDB one- and two-room flats.

The government can be in such a position to provide more for the needy because of the reserves it has accumulated throughout the years.

Below, we look at the ways how the government is able to accumulate such an amount.

Why Is Singapore So Rich as a Country?

The success of Singapore is made up of many small decisions.

Although not exhaustive, here are five main reasons why Singapore is so wealthy and how it got to be that way.

1) Having a Strong and Pragmatic Leadership

To run a successful and profitable company, you no doubt need good leadership.

Similarly, Singapore was fortunate enough to have competent leaders at the helm.

One such person was the late Lee Kuan Yew, also known as the nation’s founding father. He was the first prime minister of Singapore, and first entered office on 5 June 1959 and spent a total of 31 years and 178 days in office. One of Lee’s focuses was on developing the economy.

While others may consider the running of Singapore as “soft authoritarian”, it has made progress easier as there wasn’t constant resistance along the way. But this can only be possible if the country is run by capable leaders in a clean and honest government.

How did Lee do this?

As of today, the prime minister of Singapore is the highest-paid politician in the world, earning approximately S$2.2 million a year, including bonuses. The president earns around S$1.5 million a year.

The ministers who run their ministries are remunerated with fixed salaries as well as bonuses linked to performance and socio-economic outcomes of Singaporeans. Such ministers typically earn S$1.1 million a year.

In comparison, the top political leader in the US, the president, earns a salary of US$400,000 a year.

Practically speaking, when government leaders are well paid and their performance is linked to socio-economic outcomes, they’re more inclined to focus on building the country (and less on earning money through unscrupulous ways).

2) Capitalising On Its Strategically Located Port

While Singapore doesn’t have natural resources or much land, it does have a competitive advantage, and that’s its port, which is strategically located on the world map.

The government fully maximises the use of its port to grow its GDP.

For example, it participates in entrepôt trade, importing natural resources or partially manufactured goods regionally and globally, refining them, and then re-exporting them out again. This can be seen in the wafer fabrication and oil refining industries.

In 2020, the total merchandise trade (at current prices) was S$969.1 billion, of which S$453.5 billion were imports and S$515.6 billion were exports. With more than 130,000 vessel calls in a year, Singapore is the busiest port in the world in terms of shipping tonnage. The maritime industry contributed 7% of Singapore’s GDP in 2017.

While Singapore has since diversified in other ways to increase GDP, it continues to invest back in the maritime industry, recognising that what has worked must continue to work. With competition arising regionally, the government plans to fortify the port’s leadership position, which will uplift other sectors as well.

3) Opening the Country to Attract Foreign Investments From MNCs

Knowing that Singapore’s port can only do so much, the government has looked into other areas to further grow the economy.

One key decision was to open up the country to attract foreign investments from all around the globe.

It did this through the implementation of business-friendly government policies and through providing valuable human capital.

Here are some of the reasons why Singapore was able to attract foreign investments:

Furthermore, the government has invested heavily in education so that Singaporeans are well equipped to handle complex roles. English was also made the “default” language in Singapore, enabling its people to communicate with others on a global scale.

Going one step further to provide a more diverse workforce, the government has enabled companies to hire foreign professionals. This has closed the gap of supply and skill shortages so that Singapore continues to be attractive to global companies.

These factors, amongst others, have helped to increase overall GDP and allow the economy to grow without any natural resources.

As of 2020, the industries that have contributed the most to GDP were manufacturing, wholesale trade, and finance and insurance, contributing 21.5%, 16.8%, and 15.7%, respectively.

When the economy grows, the operating revenue that the government receives typically increases too. The bulk comes from corporate and income tax.

The government budgets its money annually, so it can be maximised to build the nation further, such as building schools and healthcare facilities and spending money on development.

In the earlier years of the 1970s and 1980s, the government had to borrow money to build infrastructure such as the MRT and Changi Airport, but since the 1990s, it has been able to tap on budget surpluses for infrastructure projects.

Singapore is still a country with very few natural resources. Its port can be threatened. And globalisation can reduce the effectiveness of human capital coming from Singapore.

One way the government tries to mitigate these risks is by building reserves.

By investing the country’s surpluses and assets (from the sale of land, etc), it’s able to build a sizable sum.

The three organisations that manage the reserves, MAS, Temasek, and GIC, collectively hold at least S$1.05 trillion (US$777 billion) in assets.

They have three objectives, which are to act as an emergency fund, protect the Singapore dollar, and provide a continuous stream of income.

The investment returns from the reserves help to ensure that Singapore constantly has a budget surplus, while still being able to build the reserves further. This will help the current generation and the future generations to come.

What Can We Learn?

One key factor for Singapore’s success was Lee Kuan Yew. He helped shape the economy and provided prosperity for the country and the people living in it.

Charlie Munger, business partner of Warren Buffett, said that the one mantra he followed in life came from Lee, and that was “figure out what works and do it”.

While personal finance can be complicated at times, in order to be rich (or have a higher net worth), one should focus on the core areas which are entirely within our control.

The first is to increase your income by being great at what you do (investing in your career). As income is required to pay the bills and to allow you to save, ensure that insurance is in place to protect it. You should also budget your money effectively so that you can spend less and save more. And ultimately, you want to have an emergency fund and invest your excess savings so that you can generate healthy returns (and beat inflation).

Don’t know where to start? Consider going through a comprehensive financial planning session.