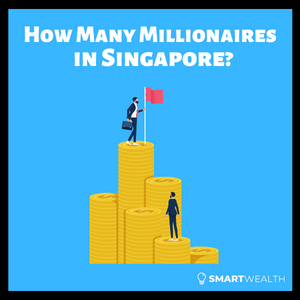 You may have heard of the movie “Crazy Rich Asians”, which was set in Singapore, but how many people in this country are considered rich?

While the exact amount in net worth (or wealth) to qualify as rich is subjective, many do hope to accumulate a million dollars in wealth.

Currently, how many millionaires (and billionaires) are there in Singapore?

The Data We Looked At

The Credit Suisse Research Institute publishes the Global Wealth Report every year. It analyses the household wealth of 5.3 billion people around the world, covering those who have less than US$10,000 to the ultra-rich.

The Singapore Department of Statistics is stated as a source for Singapore’s household balance sheet and financial balance sheet.

As this article is focused on the number of millionaires and billionaires, millionaire density, and wealth distribution, you can read our separate article on the average (median and mean) net worth or wealth per adult in Singapore.

There Are 298,650 Millionaires (Inclusive of Billionaires) in Singapore

Despite the rising cost of living and being called one of the most expensive cities in the world (in the eyes of expatriates), Singapore is still home to many wealthy people.

Here’s the wealth distribution between the rich and the ultra-rich:

Unfortunately, the report does not include the exact number of billionaires (those who have US$1 billion or more). The closest to that category is those who have more than US$500 million, of which we have 73 people in that fortunate category.

If you would like to see the list of the richest people in Singapore and how they got rich, you can read this article instead.

Singapore Has a Millionaire Density of 6.1%

What percentage of the population consists of millionaires?

This is the highest it has ever been compared to historical data:

As it seems, the millionaire density is trending upwards at an increasing rate. Will this trend continue?

This also means that another 167,075 millionaires would be added into the ranks in just the next few years.

Why Are There So Many Millionaires in Singapore?

This question isn’t easy to answer, but I believe the government has more information.

So, the following is my own take.

All along, Singapore has been a country with extremely limited land and very few natural resources to rely on. One of the main reasons why it has become so successful and rich is because of its deliberate actions to drive up the economy, which in turn, have created prosperity for the people living in it.

Singapore was primed to attract multinational companies (MNCs) and wealthy people from all around the world with many enticing benefits, such as being business-friendly, having low tax rates, having a politically-stable environment, being free of natural disasters, and many more.

This has resulted in more jobs and wealth within the country and prosperity for its citizens.

How to Be a Millionaire in Singapore?

This is the golden question, but it’s difficult to answer. If it were easy to answer, millionaires would form the majority of the population instead.

Two of the main ways to earn an income are through employment and building a business.

Most of the richest people in Singapore earned their riches through the business route, taking on higher risks than the average person on the street. That’s why they can be at the pinnacle, with many having billions in wealth.

But what should be noted is that many businesses fail.

If you’re not willing to take on excessive risks or don’t need or want to be the richest, what are your options?

The most stable way is through employment, and investing in your career is key. This means taking ownership in the value you can provide to your company, which should eventually provide you with greater monetary benefits.

With greater excess savings, it could mean starting a small business on the side or making investments in other areas.

Oh, and don’t forget to have various types of insurance in place, as you wouldn’t want to go into debt if anything undesirable happens.

While doing these may not get you to appear in Forbes, in my view, they’re a more predictable way to become a millionaire.