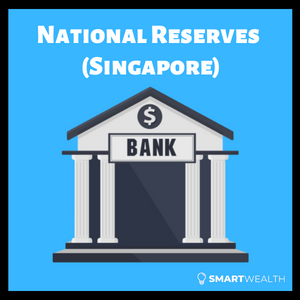 Because of the COVID-19 pandemic, Singapore had to draw down on its past reserves several times since 2020.

Does it still have enough left in the tank for future use and other emergencies?

Rumour has it that Singapore’s reserves amount to S$1 trillion.

Is it true? How much money does Singapore really have in 2021?

Singapore’s reserves are managed by three organisations. Below are their holdings:

In total, these three organisations hold at least S$1,051 billion (or S$1.05 trillion) based on published information.

Read on to learn why the reserves are likely to increase, how they are managed, and why having strong reserves is so important in Singapore’s context.

What’s the Meaning of “Reserves”?

According to the Ministry of Finance, reserves are the excess of the total assets over liabilities of the government and other entities specified in the Fifth Schedule under the Constitution. These entities include CPF Board, MAS, HDB, GIC, and Temasek.

The drawdown of past reserves (reserves accumulated during previous terms of government) is protected by the Constitution in order to prevent reckless government spending. A drawdown can only happen with the approval of the president.

How Did Singapore Build Its National Reserves?

Singapore has had strong economic progress over the many decades since its independence.

This is reflected in the growth of the country’s gross domestic product (GDP). Its current GDP per capita of S$82,503 is amongst the highest in the world.

During this period, the government’s operating revenue (mainly from corporate and personal income tax and GST) has increased, although government spending has also gone up. A positive difference of revenue over spending has produced surpluses over the years.

In addition, the national reserves also include proceeds from the sale of land as well as accumulated investment returns on said reserves.

A decent return on investment in the country’s sizable reserves will grow them even further.

As stated, the three organisations managing Singapore’s national reserves are:

They have separate roles and mandates.

Collectively, the purpose of Singapore having a reserve is for these three reasons:

Below, we dive deeper into each organisation.

MAS is the central bank of Singapore, formed in 1971. It is a statutory board.

Its monetary policy is focused on the exchange rate of the Singapore dollar against other currencies instead of controlling the interest rate commonly used by other central banks. This is because of Singapore’s unique position as a small but open economy.

MAS manages the official foreign reserves (OFR) of Singapore. It is able to buy/sell currencies in line with its monetary policy.

Here’s a breakdown of the official foreign reserves in Singapore:

Amongst the three entities, MAS is the most conservative. Its objective isn’t geared to generate returns, and as such, its holdings are primarily in safe and liquid assets.

GIC Private Limited was formerly known as the Government of Singapore Investment Corporation, established in 1981.

GIC, which some may refer to as a sovereign wealth fund, is a professional fund management company privately owned by the government. GIC doesn’t own the assets under its care (the government does), and is only paid a fee for the management of them.

Its objective is to generate decent long-term returns.

Being a fairly conservative fund manager, GIC invests in a globally diversified portfolio, mainly in equities and fixed income bonds and mostly in the public markets.

According to GIC’s report, the government’s risk preference of the investment portfolio is 65% in global equities and 35% in global bonds.

The actual portfolio consists of these asset classes:

The exact allocation is not known.

Furthermore, the exact size of the assets managed by GIC is not revealed by GIC nor the government for strategic reasons. One such reason is a matter of national security as the Singapore dollar might be open to currency attacks.

However, it has been revealed by GIC that it has “well over US$100 billion in assets under management”.

Attempts have been made by others to determine the size of GIC’s fund, such as the Sovereign Wealth Fund Institute estimating GIC’s total assets at US$545 billion. However, these figures are likely to be speculative as the exact value is never known publicly.

Here are the nominal returns and volatilities of the GIC portfolio:

Temasek is an investment holding company which owns the assets on its balance sheet. Its sole shareholder is the Singapore government, represented by the Minister of Finance.

Formed in 1974, its role is to own and commercially manage investments and assets previously held by the government. Also, its shareholder (the government) injects capital from time to time.

As an active, value-oriented equity investor, Temasek seeks to maximise shareholder value over the long run.

In the earlier years, Temasek held a greater proportion of assets in Singapore, but it has since diversified its portfolio into the global markets.

Here’s the asset distribution based on geography (as of 31 March 2021):

What’s the Total Amount of Money in Singapore’s National Reserves?

So, how rich is Singapore?

Here are the holdings of the three organisations managing the reserves:

In total, Singapore holds at least S$1,051 billion or S$1.05 trillion in assets. This amounts to US$777 billion. The exact amount of money in assets the government holds is likely to be higher because of GIC’s fund.

The Importance of Having Strong National Reserves

Let’s recall that Singapore is a small country with very few natural resources.

With great foresight, it has capitalised on its strategic port, having pushed through obstacles and having made many correct decisions along the way in order to arrive at where it is today.

Despite the prosperity of the nation and its people, Singapore still remains extremely vulnerable.

The country is highly dependent on trade. It has to import water, food, and natural gas (for electricity).

How exactly do the investment returns on its reserves help Singaporeans?

The government is able to use the Net Investment Returns Contribution (NIRC), which is comprised of:

The NIRC is able to supplement the government’s budget for nation-building purposes, such as building schools, healthcare facilities, transport infrastructure, etc.

With the NIRC and the government’s operating revenue (taxes, fees, and charges), Singapore is able to enjoy a sustained overall budget surplus.

Because a chunk of the reserves were used to fight the pandemic, it might not be prudent for the government to keep digging into the “country’s savings account” as it might negatively impact the future of the nation and the people living in it.

Overall, having strong reserves and protecting them is a financially sound policy to provide a continuous stream of income not just for the current generation but also for generations to come.

What Can We Learn From the Singapore Government?

We, as individuals, should follow how the government manages its money.

It carefully budgets where money is going to be spent every year so as to not overspend.

The government also builds an emergency fund and prioritises building assets so significant that they can generate healthy returns over the long run.

This is important to us because over the past 20 years, the average inflation rate was 1.52%, reflecting a rising cost of living.

If we’re going to leave the bulk of the money in the bank or in low-interest instruments, our money will devalue with time.

Therefore, with your excess money, it’s vital to invest it, depending on your risk profile.

Don’t know where to start? Why not go through a comprehensive financial planning session?