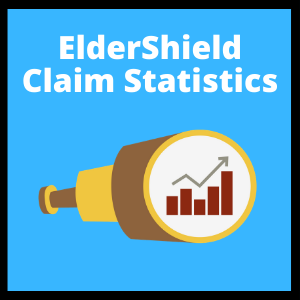 ElderShield has been the talk of the town for awhile now.

Why did this scheme go through so much love and hate?

In this article, we cover the important claim statistics and interesting facts on this topic.

It’ll be very enlightening and gives light on why the new scheme CareShield Life is created.

ElderShield is a long term care insurance scheme that provides a monthly payout for a fixed amount of time, when a severe disability happens.

It’s different from MediShield Life and the Integrated Shield Plan as they are medical insurance that provide the ability to claim from huge medical bills.

As long as you’re a Singapore Citizen or Permanent Resident, you’ll be automatically enrolled into ElderShield once you reach the age of 40 (for those born in 1979 or earlier).

The ElderShield scheme is initiated by the Ministry of Health in 2002 but administered by three insurance companies:

Premiums for this severe disability insurance can be paid using your CPF MediSave balance.

Let’s look at the statistics of ElderShield claims.

1) Out of 1.3 million Singaporeans covered under ElderShield, only 15,600 policyholders had claimed

To claim from ElderShield, you need to be unable to perform at least 3 out of 6 Activities of Daily Living.

These are the 6 ADLs:

Although full data is not readily available, there is one review report that gives us some light on this section.

As of 2017, there were 1.3 million Singaporeans covered under ElderShield.

In a very crude way to calculate the claim rate, we take claims made/total population covered.

This figure seems low but it doesn’t tell the full story.

More on that later.

This amount seems excessively high when we compare the amount of claims being disbursed.

And this was one of the reasons why there were a lot of chatter surrounding ElderShield.

3) Only $133 million were paid out in ElderShield claims

Out of the $3.3 billion collected, only $133 million were paid out in claims.

Mathematically, the claims paid out account for only 4.03% of all premiums collected.

And this made some people question the scheme.

Nobody likes to be taken advantage of.

Upon first look, it seems that the ElderShield scheme is extracting more of Singaporeans’ resources rather than benefitting them.

However, I think greater emphasis should be made on why the figures are as such.

The reason is because of pre-funding.

How does it work?

The probability of a severe disability is much lower when you’re younger compared to when you’re older.

So the premiums you’re forking out right now are usually meant to be paid out when you’re older.

This is reinforced by the fact that ElderShield premiums stop at age 65 but the coverage is for life.

It’s basically to “save for a rainy day”.

This scenario is also reflected in the reports:

So a majority of policyholders have yet to reach that age for claims.

And therefore, the current “claim rate” does not reflect the true picture and claim payouts will be much higher in years to come.

5) The Government will take over the ElderShield portfolio

In 2021, the government will take over administration of ElderShield from the private insurers.

This is a significant move.

They will administer the scheme on a not-for-profit basis.

For example, if the future claim experience turns out better than expected, there can be premium rebates for the ElderShield policyholders.

As for those who are currently on ElderShield and wish to upgrade to CareShield Life, you’re able to do so in 2021, provided you’re not already severely disabled.

While there are ups and downs with the existing ElderShield scheme, I believe the government has done a good job.

They conducted a serious review on its existing framework and came out with the new CareShield Life scheme.

They learnt from past experiences so as to benefit the future cohorts.

The government will also not be profiting from CareShield Life. Any surpluses will stay within the fund and not be transferred to other government schemes. Examples of how this will benefit policy owners are premium rebates and higher payouts.