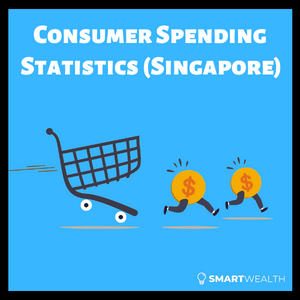 Have you been spending more or less during the COVID-19 pandemic?

Some Singaporeans mentioned they’ve been saving more, while some say they have been spending more.

We were curious to find out how the pandemic changed the landscape of consumer spending in Singapore.

In this article, we present the most updated findings, including interesting consumer spending statistics, habits, and patterns in Singapore.

Read on to find out more!

What Is Consumer Spending?

Consumer spending can be known by many names, such as private consumption, personal expenditure, etc.

In Singapore, the term “Private Consumption Expenditure (PCE)” is used. It measures the purchases of goods (durable & non-durable) and services made by resident households and non-profit institutions serving households. Data on PCE are compiled by the Singapore Department of Statistics and published annually here.

In most countries, including Singapore, consumer spending typically comprises the majority of gross domestic product (GDP), and is an important driving force of a country’s economy.

To illustrate, if everyone were to stop spending, businesses would fail and lay off employees. The government would then have no one to tax and would be unable to build the nation. On the other hand, if there were an increased consumer demand, businesses might not be able to cope with that demand, thereby raising prices of their goods and services, possibly leading to high inflation.

Let’s look at some of the statistics on consumer spending.

Data on consumer spending are compiled by the national statistical office on a national level.

But individually, do people in Singapore know how much they spend?

We conducted a survey of 948 adults and found out that about one in two (52%) are clueless as to how much they’re spending every month.

Knowing how much and on what you’re spending are good financial habits to have. Knowing these values will allow you to make improvements such as cutting out unnecessary expenses or finding better or cheaper alternatives. Although this can be a hassle, it plays a pivotal role in financial planning.

In fact, of those who do track their monthly spending, an overwhelming 71.9% of respondents say they don’t usually overspend.

Such a drop in consumer spending poses challenges for Singapore’s economy in the years to come.

What contributed to the drop in consumer spending of 14.9% from 2019 to 2020? And have any industries gained during this period?

But, if we look only at residents’ local spending, here’s what we find.

With lockdowns, social distancing, and other COVID-19 measures, the earnings of most industries have taken a dip with Singaporeans taking a precautionary measure to save more.

The hardest-hit industries are those providing accommodation services (-64.2%), followed by transport (-38.0%), and then recreation & culture (-35.5%). The reduced spending in these industries isn’t surprising as work-from-home continues to be the default (again).

Residents in Singapore are also spending more on necessities.

Food and non-alcoholic beverages saw an increase of 20.2% in spending, the greatest increase amongst all industries. This has pushed the share price of Sheng Siong, a chain of supermarkets, to an all-time high of $1.86 on 7 Aug 2020.

Next is alcoholic beverages & tobacco with an increase of 3.9%. Perhaps these are what people are turning to with the lack of entertainment outside their homes.

The education industry has also seen an increased spending of 0.9%.

Such trends in spending are not just unique to Singapore, but can be seen in other parts of the world.

With lockdowns and restrictions, consumer behaviour has changed drastically.

More people are staying (and working) at home, which has led to an increase in consumer consumption online and in the heartlands, while businesses in the Central Business District (CBD) and other business locations have suffered a sharp drop in sales.

According to a report by the Asia Competitiveness Institute (ACI), a research centre at the Lee Kuan Yew School of Public Policy, and Mastercard, it was noted that during the circuit breaker, online shopping (i.e., e-commerce sales) rose from 20% to 30% of retail transactions, while offline spending dropped from 80% to 70%. The report also stated that the trend is unlikely to reverse; however, a 50/50 split between online and offline spending may never happen.

Will digitalisation stay? The emphasis of it by the government says a lot. Singapore will spend about S$3.8 billion on information and communications technology (ICT) in 2021, an increase of about 10% from a year ago.

With more businesses, big or small, having a greater online presence, it’s expected that consumer spending patterns and expectations will shift towards online channels.

The Singapore Department of Statistics has been conducting a Household Expenditure Survey every five years since 1972/73. The findings provide detailed data on how households are spending their money. The latest survey was done in 2017/18. Although dated, it’s still insightful.

Here are the average monthly household expenditures over the years:

And here are the average monthly expenditures per household member:

6) $1,199 of monthly household expenses are spent on food

Here’s a breakdown of how much is spent on each category per month:

Food comprises the highest portion at $1,199 per month. The next highest is transport at $781 and third is housing and related expenses at $708 (this figure doesn’t include imputed rental of owner-occupied accommodation).

From the table, we can see how much consumers are spending based on their age. Household expenditures start off lower ($4,549.2) when the main income earner is young, and reach the highest point at $6,039.8 per month at age 40-44. Expenditures reduce gradually until they reach their lowest value ($2,699.2) for the age group of 65 years and beyond.

How Can You Reduce Your Personal Spending and Save More?

But does it really matter to you? Probably not. What matters is your own spending, not of others.

With bad spending habits, you’re bound to have money leaking away, and eventually, when you need it the most (for your retirement or to send your child to university), you may not have enough.

To start, make it a habit to budget your money and keep track of your spending. Doing both will ensure that you don’t overspend, and you’ll save more at the end of the month.

And with the excess money you’ve saved, don’t forget to put it into good use rather than putting it all in the bank.