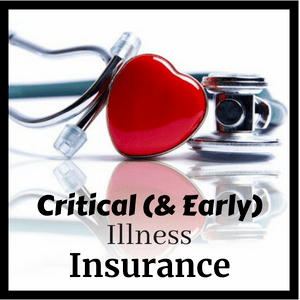 Critical illnesses (CIs), whether they’re in the early, intermediate, or late stages, can be devastating, not just on your health, but on your finances too.

In this guide, you’ll learn everything about critical illness insurance plans in Singapore, including what it is, why it’s important, how much you should be covered, and the different types of CI coverages out there.

These illnesses are typically in the severe (advanced/late) stages. Their definitions are standardised across all insurance companies.

These definitions go through several revisions periodically to provide greater transparency and clarity for consumers. These revisions also provide additional reassurances that if you make a claim from one company, a claim from another company shouldn’t be rejected as the definitions are the same.

On the other hand, an early critical illness, or Early CI/ECI, generally refers to the early and/or intermediate stages of a CI.

What Is Critical Illness Insurance (And How Does It Work)?

A critical illness insurance is an insurance policy that pays out a lump sum of money if an insured event happens.

Depending on the policy, that insured event could be a critical illness in the early, intermediate, or late stage, or could be other specified illnesses.

More on the different types of plans and coverages later in the article.

5 Reasons Why You May Need Critical Illness Insurance

Is critical illness insurance necessary in Singapore? Is it worth having it?

While CI coverage comes with a higher price tag, here are some reasons why it could be beneficial:

1) The probability of getting a critical illness can be high

While Singaporeans now enjoy a longer life expectancy of 83.9 years, we spend longer time in ill health (10.6 years, in fact).

Now, more than ever, there are higher incidences of chronic diseases, such as high blood pressure, high cholesterol, diabetes, etc. However, when compared to critical illnesses, they’re less severe.

Illnesses, especially cancer, are the cause for a huge percentage of deaths in Singapore.

Cancer is the most common critical illness and one in every four to five Singaporeans may get cancer before age 75.

We also analysed 36 months of life insurance claims statistics in Singapore. Not only does cancer account for the most death claims..

It also accounted for the highest number of critical illness claims by a huge margin.

So topics on critical illness almost always include cancer.

2) The cost of treating a CI is significant

Contracting a critical illness is not just a health concern, but a financial one too.

With medical costs increasing every year, you can expect the average hospital bill size to balloon over time.

Cancer treatments usually include a combination of surgeries, radiotherapy, and chemotherapy, and the cost for treating late-stage cancer can amount to $100,000 to $200,000 yearly.

Are we able to pay for the cost of treatment if we become unlucky?

3) There may be limitations with the coverage from hospital plans

If you’re a Singapore citizen or a permanent resident, you will be covered under the national health insurance, MediShield Life. In addition, most people would’ve upgraded their basic plan to an Integrated Shield Plan.

This combination will give you the best medical insurance coverage, and it still remains to be one of the most fundamental components in a good insurance portfolio.

If a critical illness happens, and you need to be hospitalised or a surgery is needed to be done, those bills can be eligible for claims.

However, restrictions may still apply. For example, alternative treatments are likely not to be covered.

4) Having only the basic life insurance coverage might be inadequate

Basic life insurance coverage, in this case, refers to payouts if death or total and permanent disability (TPD) happens.

Although having such coverage (and adequate amounts) is a good start, it may not be comprehensive due to the higher possibility of getting hit by a CI.

While eligible medical costs at the hospital can be covered by your hospitalisation plan, you may find yourself in a situation where you’re unable to work and earn an income when you return home.

However, other bills and financial commitments need to go on.

How are you going to find the money for that?

If you have ready cash and assets that have already been ear-marked and are meant for such situations, great. But if you don’t, that money has to come somewhere.

CI plans will be able to provide you with that money to last through your recovery period.

How Much Critical Illness Cover Do You Need?

A lot has been said about the prevalence and the implications of a critical illness.

However, what have Singaporeans done to address that?

A study was done in 2017 by the Life Insurance Association (LIA). In its lengthy 87 page report, it was stated that the average working adult in Singapore only has $59,776 of CI coverage.

This is very close to the average CI claim of $52,343.37 in a study we did on life insurance claims.

Think for yourself: would this amount be enough? Probably not, and this is why most people are under-insured.

But, how much does one need?

That’s for the standard CI, but if you want to cover for early critical illness, covering that amount will be expensive. In my opinion, I’m happy to be able to cover for one to two years of recovery period if ECI happens. You might not need so much because early CIs take lesser time to treat, cost less, and survivability is higher.

Can you go crazy and get all the CI cover you want? No, there’s an industry cap on the amount of CI cover you can get. Generally, it’s at $3,000,000. You probably don’t need that much and it can get really expensive. For ECI cover, each company has their own caps, usually around $250,000.

Now, those figures are just general guidelines, and the needs of everyone are different.

(Feel free to play around with our CI coverage calculator.)

What Types of Critical Illness Insurance Coverages Are There?

If you wish to beef up on your critical illness cover, what are your options?

Critical illness (including ECI) coverage can be attached as a rider to these policies. It typically accelerates the death benefit (meaning, if CI happens, the death benefit will be reduced by the CI payout amount). The riders of those policies usually only pay out once.

If you’re lacking in life insurance coverage (e.g., death and total and permanent disability cover), those two plans could be something for you to explore as they’re more holistic.

The CI standalone plans have low death benefit cover as the purpose is to cater for critical illnesses.

However, there are many variations out there and they’re not easily comparable.

One type is the multipay CI plan. It pays out a lump sum if an early, intermediate, or late stage illness occurs. A unique feature is that multiple claims can be made. And if late-stage CI happens, the plan can pay out a multiple of the basic sum assured. Although those multipay plans come with a heavier price tag, they are the most comprehensive CI plans out there.

Here are some questions you should be asking yourself if you wish to get coverage for early critical illness:

1) Are you already going for regular screenings?

Most of the times, when symptoms show, it might already be too late. Therefore, it’s always a good practice to go for regular screenings.

Regular screenings lead to higher chances of discovering critical illnesses in the early stages. And if you’re able to claim for it and treat it early, chances of recovery and survivability will be higher.

In addition, these screenings can identify less severe conditions like high blood pressure or high cholesterol, which will affect your chances of getting approved for insurance. So, if you’re healthy, do make sure you get covered first.

2) Are you concerned with recurrences?

A survey done by AIA in 2016 indicated that nine out of 10 Singaporeans find it difficult to get another critical illness plan after getting diagnosed with critical illness.

This is very true as insurance companies will require comprehensive documentation and reports from the doctor, and quite often, that illness will be excluded or the application rejected.

And that’s when early CI plans come into the picture. They may allow multiple claims (subject to terms and conditions) which will be very useful.

3) Are you already insured with the basic coverage?

Apart from medical insurance (which you should already have), do you already have the three main coverage: death, TPD, and standard CI?

Because those three can cripple the ability to work, they should be prioritised first, before you consider early critical illness cover. Early CI is usually seen as a bonus.

The premiums for early CI is one of the most expensive forms of life insurance (because of a higher chance of claiming).

But, if you do have the excess budget, feel free to check it out.

Although less common, certain illnesses, such as heart diseases and cancer, can be hereditary.

If you’re aware of your family members or relatives having such illnesses, there could be an increased chance that you could inherit them. So, it would be good if you get covered early.

The implications of a critical illness are not just emotional and physical, but can be financial as well.

While the emotional and physical pains stay, the financial pains can be prevented.